When it comes to fitness, focusing on simplicity is key.

I’ve been doing deadlifts as part of my exercises routine and as a personal trainer for two decades.

Whether you’re training for strength or hypertrophy, it’s a great choice because it’s one of those old-school classics that can be incorporated into any workout plan.

Below we’re going to focus on one of my favorites: the stiff-leg deadlift.

Even though the stiff-leg deadlift (SLDL) has many benefits, if performed in an improper form, it can lead to serious injuries. If you're a beginner, it’s recommended to start with lightweight or work with a personal trainer who corrects your form.

Here are the step by step instructions to make sure you perform the stiff-leg deadlift correctly:

Stand parallel to the bar and hold the barbell with a double overhand grip (palms facing you). Keep your hands shoulder-width, arms straight, and brace your core. Stand feet shoulder-width apart, legs straight.

Bend your knees very slightly, just short from being fully locked. Bring your shoulder blades together, and lift your chest and look straight ahead.

2 - With a slight bend in your knees, lean forward and lower the weight down towards the floor.

Keep your back straight, and lean slightly as far as you feel comfortable without rounding your back.

Make sure the barbell remains close to your shins. Your hamstring flexibility will determine how far you can lean over.

3 - Stand back and squeeze your glutes.

You can experiment with slightly wider and narrower (hip-width) stances until you find what feels best for you.

Stiff-leg deadlifts are a compound exercise that targets all major muscle groups in your body.

The legs are working harder than they would in a conventional deadlift but they aim to minimize the amount of quad engagement by opening up the angle of the knees.

Lower back muscles (Erector Spinae): According to studies, when compared to other variations, performing SLDL showed the greatest muscle activation in the Erector spinae.[1]

The stiff-leg deadlift activates other muscle groups as well. Your trapezius, forearms, and middle back activate to control the weight during the movement.

"This is a really great exercise that isolates your hamstrings. However, you are going to notice that you are going to start to fatigue your lower back as well." - Scott Herman, fitness model, entrepreneur, and influencer

In addition, it works your core as your abdominals contract to stabilize your body.

Far too often, lifters move too fast while going down. Rushing through the motion prevents you from maximizing your gains and increases your risk of injury.

So when you start going down, pace yourself and give your hamstrings, glutes, and legs a deep stretch. Keeping it slow is essential for maximum hamstring activation.

SLDL is not an ideal exercise for lifting heavy weights since it may make you bend forward and round your back. Instead, go for light to moderate weights and high reps. If you’re a beginner, try using dumbbells until you learn to maintain a solid form.

If you round your back, you put a lot of stress on your lower back, and you risk injury. Before bending over, make sure to keep your shoulder blades together, core engaged, your eyes looking upwards, and your neck in a neutral position throughout the entire range of motion.
When you perform the SLDL, make sure there’s no movement in the spine itself.

Your knees don’t have to be fully locked either. However, they should remain rigid throughout the exercise (hence the name ‘stiff-leg’). Once you assume the position, your knees should not move.

The key 3 differences between the two variations are the following:

Stiff-Leg deadlift:  standing position with the weight at hips level. From there, the lifter lowers the weight to the ground.

Conventional deadlift: the lifter positions the bar over his shoelaces and picks it up from the ground.  Here we are pulling with higher hips, less leg drive, vertical shins, and we are using mainly our back to lift the weight.

Since you don’t have to go all the way down to the floor, the range of a stiff-leg deadlift is shorter than that of a conventional deadlift.

The clearest difference between the two is that a stiff-leg deadlift requires your legs to remain straight (slightly bent). This puts even more emphasis on your glutes and hamstrings. Therefore, doing the stiff-leg variation hits your hamstrings harder than conventional ones.

Romanian deadlift and stiff-leg deadlift are often mixed since the difference between the two are nuances.

They mainly differ in the degree of knee flexion at the start of the movement and the proximity of the bar to the body [2] [3].

As far as programming, both the RDL and SLDL are better used for moderate reps until the lifter gets more technically skilled. For beginners, the dumbbell stiff-leg deadlift is easier to master than barbell lifts since dumbbells have a wide variety of weight range.

A dumbbell stiff-leg deadlift is a great option for practicing form, building muscles, and more flexibility.

Boosting up the weight may take some time but mastering your form with dumbbells is much easier than with the barbells.

If you’re rocking the dumbbell stiff-leg deadlift already, this is a great way to challenge yourself. This variation targets the entire posterior chain. A landmine implement (a barbell anchored to the floor with a weight on the other end) is used to provide a fixed plane of motion for the lifter while challenging the grip strength.

Great for building balance and flexibility in your glutes and your hamstrings.

It’s also a wonderful accessory for the barbell or dumbbell stiff-leg deadlift. The kickstand position can help focus the stretch on each leg separately.

The single-leg cable stiff-legged deadlift is an advanced exercise. It targets the hamstrings while also benefiting the glutes using a proper hip-hinging motion.

With the cables, you can create constant tension to get a great pump and build muscle effectively.

Performed on one leg, this exercise focuses on hip hinge mobility. Great for warm-ups or total beginners.

Just like the dumbbell stiff-leg deadlift, this is a wonderful variation for beginners. The hex bar is a great tool to practice and perfect your form.

U-Bar allows for better balance and much higher potential loads than a kettlebell, cable, or straight barbell. The weight is centered directly underneath you, along with your center of mass.

How to Add SLDLs to Your Workout In general, I recommend my clients to incorporate deadlifts into their routines 1 to 2 times a week. Combine the different variations of stiff-leg deadlift to achieve maximum results.

If you’re a beginner, try doing dumbbell stiff-leg deadlift 2 times a week to perfect your form and build strength.

When you feel ready, move on to more difficult variations.

According to a recent study [4], five to ten sets per week might be sufficient for attaining gains in muscle size and strength.

Are Sldls Considered a Back or Leg Exercise?

SLDLs are leg exercises since they extend the hips and the knees, which recruit the quads, hamstrings, and glutes.

However, since they also activate back muscles, they are also ideal for building back strength.

Yes, they do. Stiff-leg deadlifts build muscle since they do a great job of bulking up the muscles in our back, shoulders, and lower body.

SLDLs combined with a healthy diet are a great exercise to burn belly fat since they heavily engage your core.

Final Thoughts On The Stiff-Leg Deadlift

Whether you want to tweak your deadlifts or work more on your lower back and leg muscles, stiff-legged deadlifts are a good option.

It’s a compound movement that can really challenge you, increase your lower body’s power, and fire up your hamstrings.

One of the perks of this exercise is that you get to modify it according to your level of strength, and you can easily incorporate it into any workout routine. 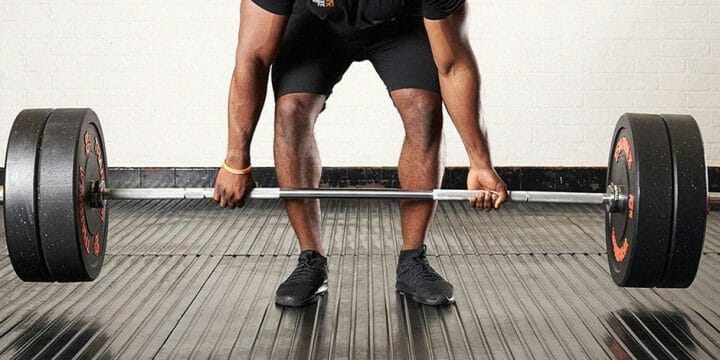