Who Are The Biggest Rugby Beasts In The World?

The world of rugby is full of some of the biggest men in sports. And the last rugby world cup proved that these men have never been bigger or stronger. Some of them look like they could be gladiators from Roman history.

And a lot of them will completely dwarf American football players. So, we decided to look at Rugby Union players from around the world and see what kind of sizes they have achieved in recent rugby history.

To do this, we focused on their official player profiles, and we ranked them based on their weight. As you’ll see, these test rugby players are massive.

Summary of the Key Findings

There was a surprisingly large list of very big rugby players, but after months of research, we found the biggest ones:

For some reason, Tonga seems to be the biggest contributing nation when it comes to player size While Opeti’s weight has fluctuated a lot, it peaked a few years ago at over 300 pounds.

That’s an immense size, and if you look up some videos of him playing for the English team Leicester Tigers or Tonga during the world cup tournament, you’ll get an idea of how he can make other rugby players just bounce off him. There must be something in the Tongan genes and diet because while Taniela Tupou plays on the international team for Australia and on a weight-to-height ratio, he would beat Opeti.

From the moment he made his international debut at a world cup qualifier, the rugby world knew it had a new star-tight head prop. Alesana is one of the infamous Tuilagi brothers from Samoa. There are five of them in total, and they all play rugby. And you most certainly don’t want to get on their wrong side.

For a man that plays on the wing, he has a surprising amount of speed despite his sheer size. Eben is a South African Rugby Union player, and he’s one of the tallest rugby players on our list at 6’8” [1]. With that height and weight, he is known for punishingly big hits.

He’s also one of the strongest on the South African squad as he can reportedly bench press 385 lbs. Andrew Porter is an Irish Rugby Union player who plays for his home team Leinster.

He plays both in a tight and loose forward position, and according to some sources, he can squat over 770 pounds. That makes him an immense asset for the scrum. Joe Marler is probably England’s biggest Rugby Union player, or at least we weren't able to find any bigger rugby players in England.

He’s been a fighting force at the World Cup and is arguably one of the best loosehead props to have played the game in recent years.

And with over 220 appearances for his home team Harlequins, he’s set to become one of the team’s longest-serving players. Here’s a Rugby Union player who literally looks like a gladiator.

There’s not an ounce of excess fat, and this big man from England is one of the strongest flankers we could find.

Apparently, he can bench press over 400 lbs, which explains why fans look forward to him simply pushing other players out of the way. If you put Tendai into any kind of physical sport, he wouldn’t stop surprising you with athletic talent and sheer force.

The rugby player from South Africa is also called “The Beast” for being such a powerhouse on the front row of his club (The Sharks) and national team.

Apparently, he can squat over 540 lbs, which makes him possibly the strongest rugby player in his country. Let’s get back to Australia and take a look at David Pocock, weighing in at over 250 lbs. He is a huge flanker and plays for his home team, The Brumbies, in Australia.

And ever since his early days in professional rugby as a youngster, he has had a great scoring record throughout his career. But if you watch him carefully in a rugby match, you’ll see that he carries his weight and the ball with some incredible speed.

Someone has timed him running 90 meters in 10 seconds, which isn't far off Olympic sprint speeds. Born in Italy and playing for Toulon, Sergio is also the captain of the Italian team. Weighing in at just under 250 pounds, he’s the biggest rugby player in Italy.

He was rumored to be heading to play the game in France, but so far, he has denied such a move will happen. Jamie is the biggest rugby player from Wales, and at 6’4”, he’s also among the taller ones. His club is The Dragons, and he has won 94 caps for the Welsh national squad as well.

He’s played the game professionally since 2007, but his age doesn't seem to be making him slow down or make him less imposing. Here is the second of the Tuilagi brothers from Samoa, and he’s arguably the strongest one in the family. Being able to bench press 415 pounds, he could make it to the list of strongest players in the sport as well.

He recently left the Leicester Tigers to join the Sale Sharks, where he might see out the remainder of a massive career. Sonny Bill is arguably the greatest player from New Zealand since Jonah Lomu.

While it’s unfair to compare Sonny to Jona Lomu, considering that the game has changed a lot, he certainly enjoys the same level of worship and respect [2].

And because he was a professional boxer in New Zealand, it’s another reason to be careful of his barging runs.

“For me to get through the toughest periods in my life, I had to look within to find the energy to do it. I don't give up. Never have. Never will.” - Jonah Lomu. And for our fans from Ireland, we’ve added Sean O’Brien to our list as well. At the age of just 24 years, he’s also one of the younger rugby players with such an imposing physique.

He plays for London Irish in the English Premier League and has also made it on the Irish and British Lions squad.

Do You Think We’ve Missed Someone On This List?

We could probably have gone on to extend this list to 50 or more players, but we thought it was best to keep it to the absolute biggest ones.

I’m sure there will also be new younger players coming up the ranks to make this list.

To be honest, though, I somehow think that Opeti Fonua and Taniela Tupou will maintain those top spots for some time to come.

At right around 300 pounds, it’s difficult to believe they will be beaten any time soon. 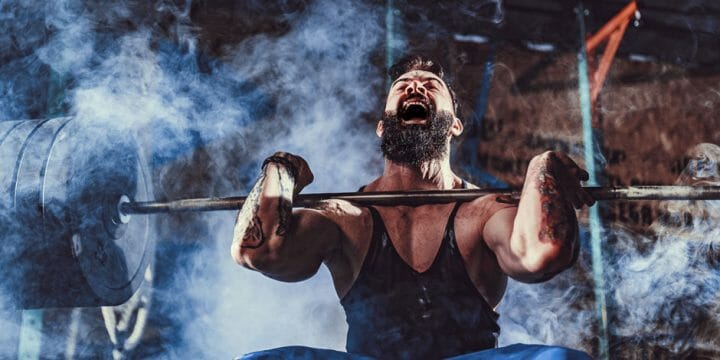 Fitness 2 months ago
Who Are The Biggest Bodybuilders in The World? Fitness 2 weeks ago
Which Are The Sexiest Female Athletes In The World?

Diet 5 months ago
The Calisthenics Diet: What To Eat & What Supplements To Take?

TOTAL SHAPE’S GUIDE TO BULKING
(Without Getting Fat!)

Delivered right to you for free.