17 Biggest Bodybuilders Of All Time (2022 Updated)

Every man dreams of one day becoming the strongest person in the world.

But for these hulking titans, they went beyond just dreaming by turning their passion into a reality.

If you've been trying to bulk up for a while now, then you know how hard it is to gain massive yet quality muscles.

For professional bodybuilders, it takes years of focused training, strict diet plan, and self-discipline to get the amazing physique they've been aiming, and then a couple more years to pack on muscle and strength. 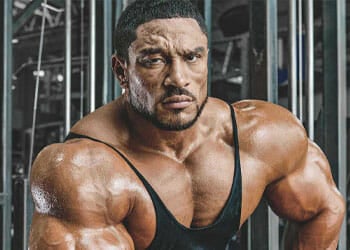 Originally from Curacao, Roelly’s family moved to the Netherlands, then to the U.S when he was still young.

He has been in competitive bodybuilding since 2009 and currently holds 5th place in the recent Mr. Olympia competitions. He is also considered to have the best arms in bodybuilding history. 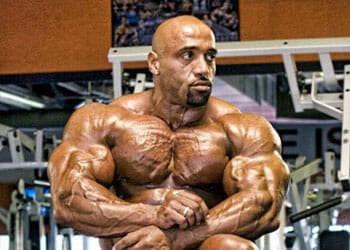 Dennis Tyron James, nicknamed “The Menace,” was born in Germany in 1966. Dennis James is 5’8” tall with a competition weight of 265 lbs.

Dennis James first started training in the professional bodybuilders category when he was 18 years old.

He has been a professional IFBB bodybuilder until his retirement in 2012, where he placed 3rd in the Mr. Olympia competition. 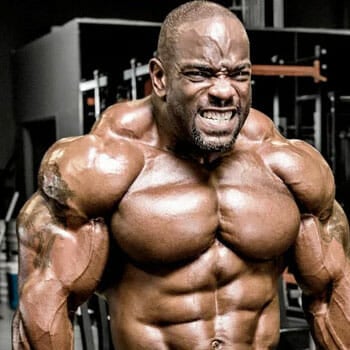 He boasts a 57” wide chest and is one of many biggest bodybuilders to have the best developed upper body.

Jackson’s career began when he won the National Physique Committee USA Competition in 2001.

Since then, he has competed in a number of annual events for bodybuilders, winning the title ‘World’s Strongest Professional Bodybuilder’ at the 2009 Mr. Olympia stage. 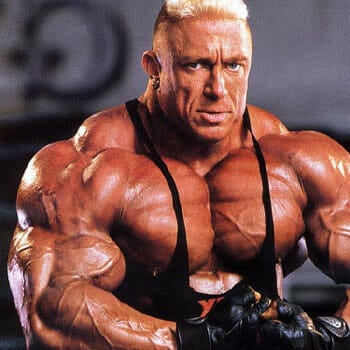 Hailing from Germany, Markus Ruhl is a retired professional bodybuilder who was born in 1972. He is 5’10” in height with a competitive weight of 282 lbs.

Initially, a football player, Rühl seriously injured his knee, which ended his dreams of becoming a football superstar.

At 18 years old and with his childhood dream crushed, Markus Rühl looked towards other avenues, with bodybuilding being a prime interest.

The rest is history, with some notable achievements, including placing 1st at the 2000 Toronto Pro, Top 3 at the 2006 Austria Pro Grand Prix, and 5th at the 2004 Mr. Olympia stage. 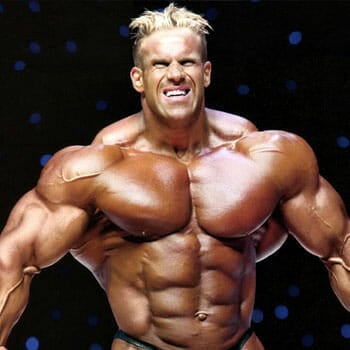 Jason Isaac Cutler, also known as Jay Cutler, is one of the most successful icons and biggest bodybuilders worldwide.

At 5’10”, weighing some 290 lbs off-season, and a competitive weight of 260 lbs, Jay Cutler shows that he’s got big body muscles and an even bigger bank account, being the 3rd richest bodybuilder in the world.

Like most retired bodybuilders, Jay is still in great shape and is currently pursuing personal business ventures, such as his own fashion line called Cutler Athletics. 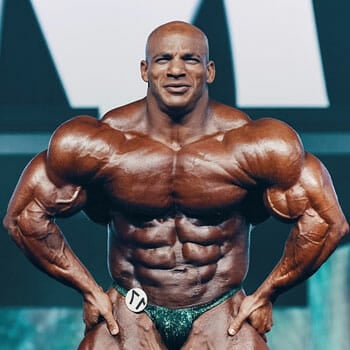 Mamdouh Mohammed Hassan Elssbiay, popularly referred to as Big Ramy, was born in 1984.

He has since then won countless competitions and is currently Mr. Olympia’s 2020 champion. 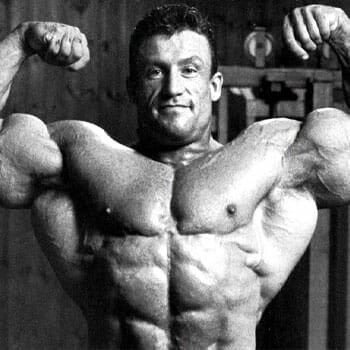 Nicknamed ‘The Shadow,’ Dorian Andrew Yates or Dorian Yates is considered one of the biggest bodybuilders in history.

His achievements include holding the world record for the 5th highest number of Mr. Olympia wins (held for six consecutive years).

Dorian Yates has since retired from the professional bodybuilding world. 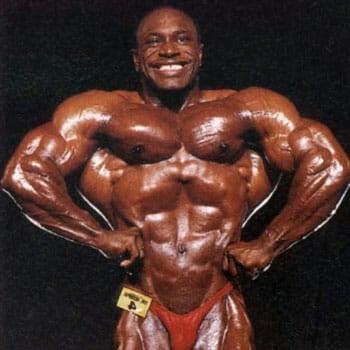 Born in 1959, Lee Haney has refused to be outclassed by the younger generation.  is still one of the most successful bodybuilders to this day.

Currently, he is the founder of the Lee Haney Games, a competition that judges both men and women on physique, fitness, wellness, and how well they can pull off a bikini. 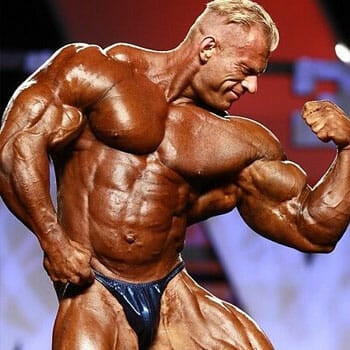 Nicknamed “The Big Bad Wolf,” Dennis Wolf was born in 1978 in Kyrgyzstan to German parents.

He is one of the greatest bodybuilders worldwide, at 5’11” in height and a competitive weight of 275 lbs.

Growing up, Dennis took up martial arts, which ignited interest in bodybuilding and weight training.

He became a professional bodybuilder in 2005, with notable achievements such as becoming the Arnold Classic champion in 2014 and securing 4th place in 2015’s Mr. Olympia stage. 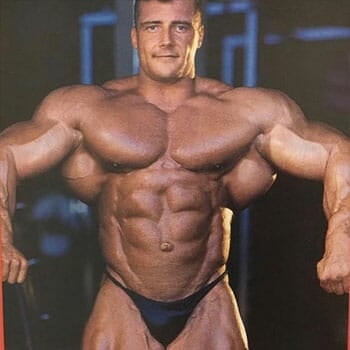 Jean Pierre Fux is a professional Swiss bodybuilder. He was born in 1968 in Switzerland and started his training when he was only 16 years of age.

In 1993, he entered the bodybuilding world and placed 4th at the IFBB World Amateur Championships.

Since then, he has participated in multiple competitions with varying wins and placements.

As of 2020, Jean is a personal trainer with a passion for saving cats. 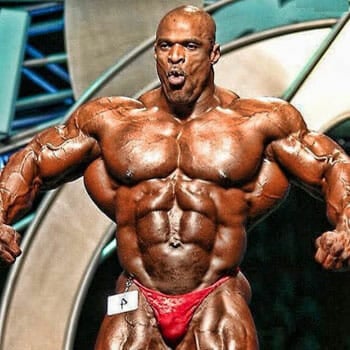 Ronnie Coleman was born in 1964 in Louisiana and has since retired from professional bodybuilding.

More than just brawn, Ronnie graduated from Grambling State University in 1984 with a BSc. in accounting.

Ronnie Coleman is regarded as one of the biggest bodybuilders of all time, having won the Mr. Olympia title for eight consecutive years since 2000. 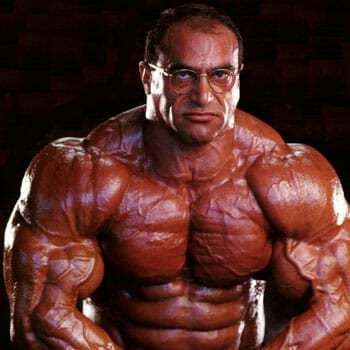 Nasser El Sonbaty was born in 1965 in Germany.

He earned the nickname ‘The Professor’ due to his trademark spectacles and ability to speak multiple languages fluently.

Nasser began his career as a bodybuilder in 1983 and made his debut appearance at the 1994 Olympia stage. Notable achievements include a 1st place win at the 1999 IFBB Arnold Classic and a 2nd place finish at 1997's Mr. Olympia stage.

He remained active as a bodybuilder until his passing in 2013 due to kidney failure. 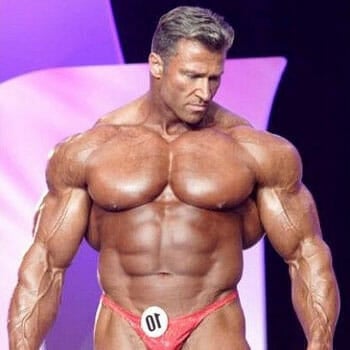 Gunter is a German IFBB professional bodybuilder. He is known as “The Gentle Giant,” standing at 6’1” in height, weighing 330 lbs off-season and 300 lbs in season.

Born in 1970 in Olfen, Gunter has been involved in competitive bodybuilding since 1990.

He retired in 2006 and is currently pursuing personal business ventures.

He remained active as a bodybuilder until his passing in 2013 due to kidney failure. 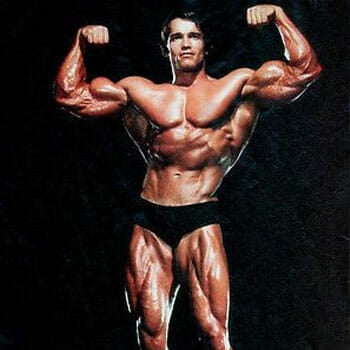 In the world of bodybuilding, perhaps none other is more infamous than Arnold Schwarzenegger.

At 6’2” tall and with a contest weight of 253 lbs, Arnold is most notable for winning the Mr. Olympia title 7 times.

Born in 1947 in Austria, Arnold has created much content about bodybuilding and cherishes the Arnold Sports Festival, a body-building event second to Olympia.

He has since retired from being a professional bodybuilder and has pursued other interests, including becoming a Hollywood movie star and becoming the 38th California governor (2003-2011).

Despite retiring from active bodybuilding, Arnold Schwarzenegger still keeps himself in great shape and is loved by fans around the world. 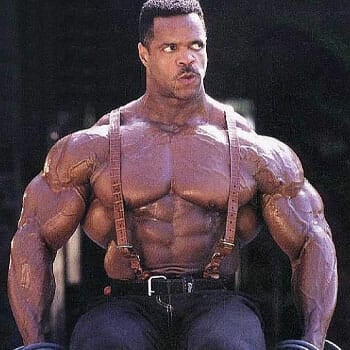 Paul Dillett originates from Quebec and was born in 1965. He is 6’2” tall with a competition weight of 285 lbs.

Dillett has participated in over 40 competitions with other bodybuilders, including a 4th place finish at 1994’s Olympia contest.

Dillett worked out four days a week in his prime, with his workout routine focused on shoulders, hamstrings, quads, chest, arms, and back.

Currently, he is a businessman, working as current CEO and owner of the World Beauty Fitness and Fashion Inc. 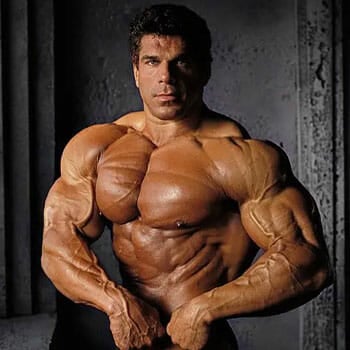 Louis Jude Ferrigno, aka the ‘Incredible Hulk,’ was born in 1951 in New York. He has won two Mr. Universe titles and is considered Schwarzenegger’s greatest rival.

Lou Ferrigno is known as one of the most recognizable bodybuilders, at a tower 6’4” in height and 315 lbs.

The ‘Incredible Hulk' began his career in bodybuilding in 1969 and even appeared in a documentary called ‘Pumping Iron.’

His muscle mass building workout is wrapped up in a 6-day weekly program consisting of several routines.

These exercises target the chest, back, arms, shoulders, and legs, which Lou Ferrigno considers the most important physiques in bodybuilding.

Lou Ferrigno has since retired from professional bodybuilding wand is now settled in his acting career, personal training, and other businesses. 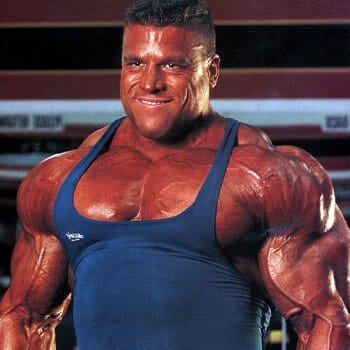 At 6’4”, a competition weight of 330 lbs, and weighing up to 420 lbs off-season, Greg Mark Kovacs has undoubtedly earned the #1 spot on our list.

Greg Kovacs was known for performing incredible feats, with his brute strength allowing him to bench press 700 lbs easily.

After his retirement, he moved on to run his businesses and coach competitive athletes until his passing in 2013 from heart failure.

Who Is the Biggest Mr. Olympia Ever?

The biggest Mr. Olympia ever is Greg Kovacs, who stood a towering 6’4” and weighed up to 330 lbs. competitive weight.

Since his passing, Big Ramy has taken the title, at the height of 5’10” and contest weight of 316 lbs.

Who Has the Biggest Muscles on Earth?

Ronnie Coleman is considered the man who has the biggest muscles on Earth.

Ronnie Coleman is listed as ‘The Most Muscular Man in the World’ by the Guinness World Records [1].

So, Who Is The Biggest Bodybuilder of All Times?

Becoming a bodybuilder isn’t a hobby; it’s a commitment.

To become the biggest bodybuilder, an individual requires focus, commitment, and a passion for achievement.

As we’ve seen, the title of ‘the biggest bodybuilder’ is simply just one of many milestones to aim for.

Many of the biggest bodybuilders in the world have all turned towards other achievements, such as pursuing business ventures and personal interests even after becoming champions.

These men have showcased that success is not a race; it’s a journey.

If you’re looking to achieve great success, then start early, just as many of these bodybuilders did. And even if you’re just a fan, don’t forget to share with us who is your favorite! Fitness 10 months ago
Who Are The Biggest Rugby Beasts In The World? Fitness 2 months ago
Who Are the Hottest Female Bodybuilders In the World? 2 thoughts on “Who Are The Biggest Bodybuilders in The World?”