Why Does Pre-Workout Make You Tingle? (From a Nutritionist)

I've worked as a personal fitness and strength coach for over ten years, and during that time, I've tested countless pre-workout supplements with clients and the rest of our team.

Based on our experience and feedback from a dietitian, beta-alanine might be one of the most effective amino acids to improve athletic performance, but I've always warned my clients about the infamous beta-alanine itch.

It's nothing dangerous, just a bit unpleasant, but the inner science nerd in me wanted to find out what exactly causes that tingling sensation.

Here's what my research revealed.

Why Do Pre-Workouts Make You Tingle?

I was always aware of beta-alanine causing that tingling, but my dietitian also pointed out that a substance called niacin could have the same effect.

Let's start with the more well-known one first.

In some previous research our team did, we were able to identify that beta-alanine was always in the pre-workout formula of the best supplements. There has been a lot of clinical research into the link between beta-alanine and improved strength, showing its effect on the body [1].

Scientists were able to show that beta-alanine combines with an amino acid called histidine. This combination may produce more muscle power and less neuromuscular fatigue, but it also causes a tingly feeling mainly in the hands and feet.

What's good to know is that this is a harmless nervous system reaction from taking beta-alanine, and it generally only lasts an hour [2].

Personally, I find it is a good indicator to tell me that my pre-workout has been absorbed, and I'm ready to increase my exercise capacity. And once I'm in the weight rack, I barely notice the itchy skin tingling.

This is less common in pre-workout blends, but I did encounter it with one client who just didn't like the beta-alanine supplementation side effects. We switched him to a different pre-workout supplement, but he still reported the skin tingle.

It turned out that this product contained a strong dose of niacin, which is a common form of vitamin B3 [3]. And some pre-workouts and fat burners include niacin and other B vitamins for their link to releasing energy from carbs [4].

But, in high enough doses, niacin can cause itchy skin, and the science behind this is still not fully understood [5].

So, if you're not a fan of tingling skin, then you're best off avoiding both beta-alanine and niacin in pre-workout formulas.

How Long Does The Tingling Sensation From Pre-Workout Last?

So, unfortunately, there is no scientific study into how long this tingling should or could last. But I do have feedback from many years of experience and research both in our team and with clients.

Based on this, I would say that the beta-alanine tingles usually last for about 30 to 90 minutes. Some people don't notice them at all, while others will still feel it after they're finished at the gym.

With niacin, the data is even less available, but it's our experience that fewer people will experience it, and when they do, it usually doesn't last for longer than 30 minutes.

What Can You Do To Reduce The Tingling?

Here are the three main tips I give my clients when they complain about the tingly feeling.

What I generally advise clients is this: It's just the effect of an amino acid, and it's not harmful. Unless it's really distracting, use the tingling as a reminder that you can now push harder. And the more you push your body, the more the tingling will die down.

It's also a great timing tool.

When you know how long after taking your pre-workout the tingling starts, then you know when it's best to take it for maximum effects on your lifting.

If you find that the feeling gets too intense, you could reduce the dosage a bit. Start by taking half the recommended dose and see how that feels. You might also find that your body slowly becomes used to the effects and that you gradually feel less of a tingle.

3. Switch To A Different Product

This is also a perfectly acceptable choice for anyone that really struggles with tingles. I've had a few clients that switched to other products with no beta-alanine, and they still managed to get good results.

Is the Tingling From Pre-workout Supplements Dangerous?

No, the tingling from pre-workout supplements is not dangerous. It's a normal reaction and only lasts a short while as your body processes the boosted beta-alanine effects.

Where Will You Feel the Pre-workout Tingles?

You will mainly feel the pre-workout tingles in your hands and feet. But some people have also reported feeling it in their forearms and calves. It's like a slight itchy feeling that is more of a distraction than anything else.

Do You Know How To Deal With The Pre-Workout Tingles?

The reality is that many pre-workout supplements contain beta-alanine, and you'll probably start feeling the effects.

It's nothing to be worried about, and it can even help you with the ideal timing of your intake.

The good news is that you can find great supplements that have gone through our extensive research and testing with proven results. You can check them out on our review page, which includes products that don't give you a tingling feeling. 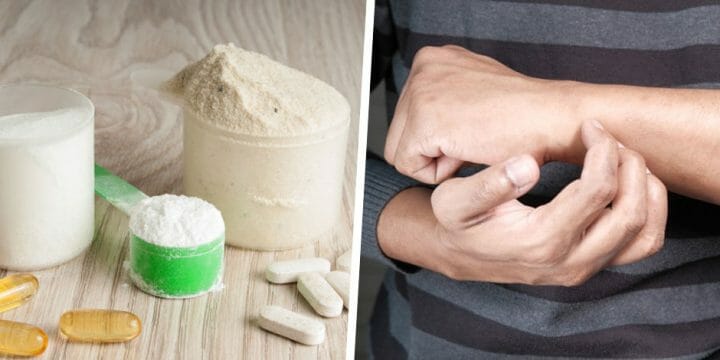 By Connor Sellers 2 months ago
Why Does Pre-Workout Make You Itch?
Everything You Need to Know By Connor Sellers 2 months ago
Why Does Pre-Workout Make You Poop? (Expert’s Opinion)