Once sporting a beer belly, Tim McGraw is now showing off a six-pack.

The country star has turned his lifestyle around and lost over 40 pounds. He shared his diet and fitness routine selflessly, so I wanted to make this detailed guide for everyone thinking it's impossible to achieve Tim's physique.

Nevertheless, he’s a great role model to many athletes and people trying to get healthy and fit.

As he revealed, McGraw played baseball from an early age and was an overall active child.

His talents got him into the Northeast Louisiana University on a baseball scholarship.

However, an injury ended his chances of getting to the pro league.

Instead of going to a baseball league, McGraw learned to play the guitar and started playing with local bands.

He discovered a new passion and dropped out of college in 1989 to pursue a music career.

McGraw has released 15 studio albums, ten of which have number one hits on the Top Country Albums charts.

The musician also has 25 singles that hit number one, as well, and he has sold over 80 million records around the world and became one of the best-selling musicians of all time.

McGraw has won 3 Grammys and a significant number of other music awards, and he also tried acting.

Still, his love for sports has never gone away, and he's a part-owner of the Nashville Kats football team.

At 5' 10 and 175lbs, Tim McGraw looks incredible. However, as many remember, the dad of three and husband of country star Faith Hill used to be on the heavier side. About 40 pounds and 13 years ago, McGraw starred in Four Christmases.

When his daughter pointed out he looked big on the screen, he realized he had lost control of his fitness. As I mentioned, he was an athletic guy, but he got up to 215 pounds.

He decided to stop eating "truck-stop foods," burgers, and drinking alcohol and started going for walks in the morning.

The walks turned into 20-minute runs, and McGraw was soon hitting the gym pretty hard and lifting weights.

What's most surprising is that he realized this helped his singing, too, not only his health. As he said for the Men's Health magazine:

“I use my whole body to sing—my legs, my butt. And having more control over those things makes my voice stronger.”

His workouts got so serious, he started bringing equipment on tour and working out with his band before concerts, using the knowledge he got from his trainer, Roger Yuan.

Tim McGraw takes a lot of pride in his transformation, as he should. His hard work is evident, and more importantly, he's healthy. When he's not on tour, McGraw works out three times a day. His workout sessions last for 3.5–4 hours.

“I don’t really get tired of training. There’s such a feeling of accomplishment that comes from the feeling of being my age and still being at the top of my game.”

He shared his daily workout with Men’s Health magazine, and it looks something like this:

For his morning workout, McGraw loves doing some cardio, such as basketball or running.

The early afternoon workout includes even more cardio or a CrossFit session.

In the afternoons, McGraw typically does plyo or weight training. 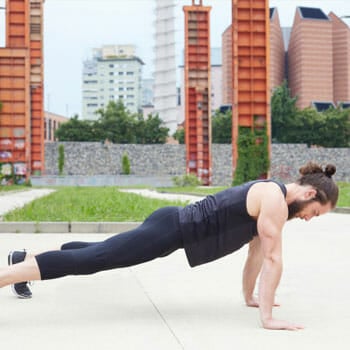 Yuan, a martial arts expert and trainer, designed a special fitness plan for McGraw that he shared for the Men's Health mag.

McGraw does one set of each exercise and then repeats everything without rest. 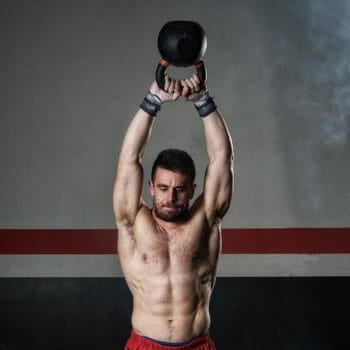 Tim McGraw works with bars, pulleys and works on his balance, core, and weight training strength.

This type of training builds up the muscles between your connective tissues (core) and ribs.

Strengthening your core is essential for good posture, healthy back, balance, and stability [1].

Since Yuan is a martial arts expert, there are also lots of punches and cardio.

“My mind is clearer, my sense of purpose is sharper, and my relationships are deeper. Consistent physical exercise helps me bring focus to my life.” 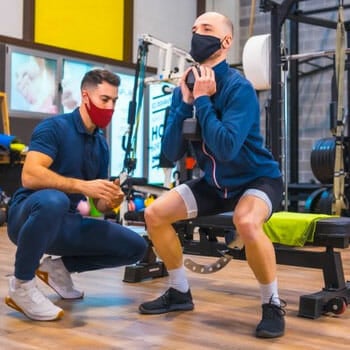 When he doesn’t have too much time for a workout, McGraw typically does this routine:

He does each of these moves for 40 seconds, then takes a 20-second break.

He also rests for one minute after each round and does five rounds total.

But, exercise wasn’t the only thing responsible for Tim McGraw’s incredible weight loss. A clean diet consisting of fresh, minimally processed, and natural foods made a huge difference in his weight loss journey.

Tim McGraw says he eats lots of veggies, meat, fruit, oatmeal, and spelt. Moreover, he makes sure to drink plenty of water to stay hydrated.

He also credits his wife, Faith Hill, for helping him through hard times.

The singer eats whole and unprocessed foods, like oatmeal with berries, grilled salmon, and kale salads.

McGraw loves burgers and sweet tea, so he occasionally indulges.

Part of McGraw's days start with cayenne, lemon juice, manuka honey, and flaxseed, but he also uses lots of Goji berries and liquid amino acids in his diet.

Tim McGraw's journey to a better body and health is proof that you can achieve your dream body at any age.

You only need determination and support from your loved ones. What are your thoughts on this topic?

Share them in the comments; I'd love to hear different opinions!