He recommends sticking with what works. Let’s find out what works for him, then.

Here’s more detailed information on the exact diet and exercise routine he follows to prepare for the fight and stay in good health.

His Most Notable Achievements

Due to his dedication and hard work, this talented athlete became a High School All-American wrestler twice and the first Big 12 wrestling champion from the University of Missouri. He was even the college wrestling assistant coach.

He won his first professional fight in 2009 and joined Strikeforce afterward.

In 2013, he made his UFC debut and continued winning most of his welterweight bouts with impressive first-round knockouts.

Some of the notable opponents he defeated are Josh Koscheck, Jay Heiron, Dong Hyun Kim, Darren Till, Demian Maia, and others.

He spectacularly won his first UFC title after beating welterweight champion Robbie Lawler in the fastest fight in UFC welterweight history, which lasted only 2 minutes and 12 seconds. [3]

Unfortunately, he had shoulder surgery, so he spent most of 2018 recovering, away from the fights(undergoing physical therapy, getting stem cell injections, and platelet-rich plasma/PRP shots).

At that time, this world-classfirst-rate UFC champ appeared on Fox as a commentator and analyst for UFC Tonight, tried stand-up comedy, and took up acting.

He landed action stunts and roles in movies like Escape Plan 2: Hades, Olympus Has Fallen, Kickboxer Vengeance, Office Uprising, Sultan, etc., and turned out to be a success even in the film industry.

Even if he doesn’t feel like training or fighting, Woodley gets up at 6 a.m. every morning and works out intensely because he believes that consistency in his daily routine matters a lot as greatness doesn’t come by chance, but it’s a choice you make.

As this reigning UFC welterweight champion suggests, you need to be a patient person with the right rhythm to box successfully. The key is perfect timing, increased stamina, physical and mental agility.

That’s why his workouts are focused on pairing different training styles to build both power and endurance simultaneously.

“I don’t need more muscle. I need endurance. I need explosion. I need quick feet. So that’s why I’m hitting the agility ladder, pushing a sled, doing sprints, and slamming the medicine ball. These are the things that I can do and still perform at 100 percent.”

Here are the exact workouts he does to achieve his physical goals - increased endurance, stamina, and power necessary for his maximum effectiveness in the octagon.

“There is no cardiovascular machine that makes me feel anywhere close to as exhausted as I do after a VersaClimb workout.”

Here’s a sample of a full-body title-card workout plan, one of those Tyron Woodley used to prepare for UFC 228.

To get in the best possible shape and form, strive to do the sets and repetitions below without rest in between exercises (only rest upon completing each superset/circuit as suggested).

Now let’s take a peek at one of his MMA explosive circuit strength training sessions when he prepared for UFC 161.

It consists of 55 reps of 11 barbell exercises performed in 50 seconds, including: 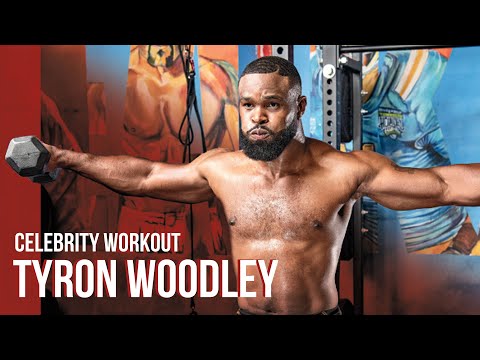 He prefers quick and easy breakfast, and his favorite combos are:

T-Wood also makes his own bulletproof coffee with raw sugar, Himalayan salt, Onnit MCT oil made from coconut (instead of using butter), and Alpha Brain.

He doesn’t use pre-workouts with stimulants but takes Onnit’s top-notch supplements like Krill Oil and Shroom Tech.

What Do You Think of Tyron Woodley's Workout?

Sticking to T-Wood’s grueling workout principles and plans seems tricky. It’s not for the faint-hearted.

However, it could be rewarding. Just imagine developing muscle strength, stamina, explosiveness, power, and overall physical condition like his must be, with the accompanying health benefits.

I guess following his high-protein diet plan would be less challenging. You need to load up on protein and carbs to get enough energy for completing all those endless exercise circuits without resting.

Do you think you have what it takes to train like “The Chosen One”?

If you try it out, you’ll see why he’s among the greatest combat sports fighters ever.

By Connor Sellers 18 hours ago
The Calisthenics Diet
What To Eat & What Supplements To Take?