Some genuinely amazing female Olympians participated in winter and summer games these last two years. These women are strong, capable, and hot.

They won the world championship gold medals, so their beauty is only surpassed by their remarkable achievements in sports. Recently my team and I got into a heated debate about who the most attractive one among these ladies actually is.

So, in an attempt to avoid our biases, we had our readers cast their vote, and after a few weeks of gathering results, we compiled them and came up with this list of the 10 hottest female Olympians.

The last woman on our list of hottest female Olympians is Lolo Jones.

Lolo Jones is a world-renowned American track and field athlete. She specializes in the 100-meter hurdles and is a two-time Olympian, competing in the Summer Olympics in 2008 and 2012.

This attractive female athlete was favored to win the women's 100m sprint hurdles at the 2008 Summer Olympics in Beijing, but she slipped on the penultimate hurdle and finished seventh [10].

Fun Fact: Jones was given the name Lori after her mother when she was born, but she claims she began calling herself "Lolo" to distinguish herself from her mother on the phone.

The stunning young woman in ninth place is Valentina Acosta Giraldo. She is living proof that endurance and hard work pays off. After joining the Colombian National Team, she started training for four hours a day.

She won her first gold medal in 2019 in Madrid at the World Youth Championship [9]. After winning the gold, she thanked her family, which has been very supportive of their decision to pursue archery.

Powerful, beautiful, and strong female athlete! These three words describe the young American gymnast in eighth place on our list.

Simone Biles, a U.S. gymnast, part of Team USA, competing in her first Olympic Games, was one of Rio 2016's brightest sensations. She set an American record for most gold medals in women's gymnastics at a single Olympic, with four golds and a bronze [8].

Fun Fact: In an interview after her win at the Rio Olympics, when compared to male athletes, she replied: "I'm not the next Usain Bolt or Michael Phelps. I'm the first Simone Biles."

Born in 1991 in Macerata, Italy, Camila Giorgi is a professional tennis player. She has won one WTA (Women's Tennis Association) title and reached a career-high singles ranking of world No. 26 in October 2018 [7].

Camila is famous for her unique and aggressive playing style. People learned about this beautiful woman when she beat then #1 Victoria Azarenka at the 2014 Aegon International.

Fun Fact: Her mother makes the clothes Camila wears at tournaments. She has a sports clothing brand called Giomila. In April 2022, the store opened sales to the public.

The young woman in sixth place on our list of hottest female Olympians is an inspiration to all of us.

At only 18 years old, she has won three medals at Winter Olympics [6]. She is the only freestyle skier in Olympic history to win three medals in a single Winter Games. There will be many world championship medals for this young lady!

Eileen is a motivated, determined and intelligent young woman that we should all look up to.

Fun Fact: Eileen is a talented piano player apart from being an Olympic gold medalist.

"I wanted to represent myself and this competitive style that I really take pride in and that desire to push myself and push the sport."

The fifth amazing woman on our list is Michelle Jenneke. She is not only an excellent hurdler but also a model. She won a silver medal in the 100 m hurdles race at the 2010 Summer Youth Olympics [5].

After her victory, she became an internet sensation, thanks to a video of her pre-race routine, which went viral. Jenneke has since appeared in magazines and commercials and was even named one of the "sexiest women in sports" by Maxim magazine. She has also done some photoshoots for Sports illustrated.

In addition to her modeling career, this Olympic silver medalist continues to compete as a hurdler.

Fun Fact: Here is a video of her famous warm-up dance. 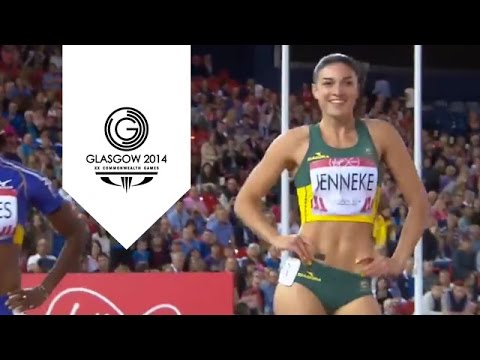 Yuliya Levchenko is a beautiful Ukrainian high jumper who made her first appearance at the Youth Olympic Games in 2014 [4]. She won her first gold medal with a jump of 1.89 meters.

She has since competed in the European Athletics Championships and the IAAF World Championships, winning a bronze medal in 2017. We feel Levchenko is a talented athlete with a bright future ahead of her.

Fun Fact: She started her professional career at the age of 18, and she is considered one of the best-looking athletes in the world.

Sydney Leroux is a professional soccer player who has represented the United States internationally. She is an Olympic gold medallist, having won the gold with the U.S. women's soccer team at the 2012 London Olympics [3].

This American woman has also played for several professional clubs, including the Boston Breakers of the National Women's Soccer League (NWSL) and F.C. Kansas City of the NWSL.

Fun Fact: Leroux and her national colleagues have appeared in numerous editions of E.A. Sports' FIFA video game series, with FIFA 16 being the first to feature female players.

The second woman on our list of hottest female Olympians is the stunning basketball player Antonija Sandric. Her beauty got her the title of the Miss Mediterranean Games in 2009. Despite having many offers to become a model, Antonija focused on her career and getting a university degree.

Playing with the Croatian national women's basketball team, she won the bronze medal at the 2009 Mediterranean Games. Her national team won a tenth place at the Olympic games in London in 2012 [2].

Fun Fact: She was crowned the most beautiful athlete in the 2012 Olympics by the American Bleacher Report.

The first woman on today's "hottest list" is Ivona Dadic. Ivona was born in Wels, Austria, in 1993. and she is of Bosnian descent.

At the young age of 9, she won her first competition. We saw her take a big step at the Olympic Games in Tokyo in 2021, where she won eighth place in the Heptathlon [1].

Her most significant professional achievement was winning second place at the World Indoor Championships in Birmingham, the United Kingdom, in 2018.

Fun fact: Her hobbies are dancing and watching football, and she likes modeling.

Not surprisingly, Ivona Dadic ended up as the hottest female Olympian for our readers. With her perfectly sculpted athletic build and stunning blond hair, no one could question her claim.

If you got inspired by these amazing women and decided you want to look and perform like them, we advise you to first get your diet and workout regimens firmly locked in, and if you find yourself needing a little push, check out some of the best fat burners for women on the market today.

They are not magic pills to turn you into Ivona overnight, but in my experience, they can make that journey significantly faster.