Is Brock Lesnar On Steroids? (Revealed)

Brock Lesnar's massive physique with incredible agility inside the ring drew the attention of many, including my fitness clients and me.

Some have approached me and asked if his fighting skills are possible without steroids. To give them the most accurate answer, I dedicated weeks to research interviews with Lesnar and videos of his bodybuilding diet and workout plan to determine whether his physical changes were naturally achievable.

In this article, I'll look into Lesnar's diet and exercise routines, and at the end, I will conclude based on my experience with athletes who used steroids, whether Brock is natty or not.

Brock Lesnar was caught taking steroids after testing positive before and during a 2016 fight against Mark Hunt.

Furthermore, he did not deny such steroid claims when he was tested.

In a YouTube interview, he claimed that he is "white and jacked," and people should deal with it.

He also seemed under tremendous pressure throughout the conversation, which may have prompted him to confess and come out.

Signs Of Lesnar's Steroid Use

Brock seems to have good genetics, and he looked relatively bigger than other young teens at 15. Studies confirm that gaining muscle size during puberty is expected [1].

However, Brock showed excessive weight gain when he added around 80 lbs more in a year. According to research, steroid use enables athletes to bulk up much faster than normal. Therefore, his sudden massive gains can indicate that he is using anabolic drugs [2].

After looking at some of Lesnar's photos from the ring, I noticed Brock has fatty tissue around his pecks; a condition formally called gynecomastia.

Men who use steroids are more likely to develop this condition because they raise estrogen levels. According to a study, having more estrogen than testosterone in men could result in gynecomastia [3]. His body appears bloated as if he is retaining a significant amount of fluid in his muscles.

Furthermore, he has cobra-like traps that contrast with his fatty waist.

According to research, male deltoids and trapezoids have more androgen receptors than other muscles. As a result, when steroids are used, they develop disproportionately faster [6]. From watching several interviews with Brock, I learned that he’s able to improve his physique by modifying his diet after diverticulitis treatment.

He began to eat a healthier diet that included lean meat, complex carbs, and fresh vegetables, as opposed to the carnivorous diet that produced his massive frame.

Furthermore, he stated that he further shaped up his body to compete for the WWE and UFC through rigorous high-volume, high-intensity workouts, and supplementation with muscle recovery and endurance supplements.

Can Brock's Physique Be Achieved Naturally?

Brock's physique can be achieved naturally, but not as quickly as he did, gaining 50 pounds in a year.

According to a study in 2019, people who lifted weights found a significant increase in lean body mass by 1.2 kg or roughly 2.5 pounds in two months, suggesting that it may require three years to add 50 pounds of weight with consistent training [7].

Furthermore, eating considerably more calories than your body burns is required for rapid weight gain. Before being diagnosed with diverticulitis, he ate about 3,200 calories every day, including 300 grams of protein, which vastly contributed to his big physique [8].

Brock Lesnar's physique was most likely achieved with an intense workout regimen, a proper diet, and proven supplements.

After watching interviews with Brock Lesnar, I discovered that he rarely discusses the specifics of his diet. However, he has been dubbed the "Beast" because he is a carnivore and fights viciously, whether in the ring or the cage.

But after his diverticulitis surgery, he decided to consume 7000 calories per day of a much healthier diet consisting of meat, potatoes, fresh fruits, and vegetables.

"I've had to change my diet, and you have to make food part of your life… I feel better. I recover faster. If I wasn't seeing the results I'm seeing, it would be very hard to do."

He also drinks a gallon of water with electrolytes and supplements like whey protein, BCAAs for men, creatine, and men's multivitamins, to name a few. According to his social media profiles, Brock Lesnar grew up on a farm.

Since he has no easy access to workout equipment available in the gym, he used 180-pound tree trunks to carry over his shoulders to develop his leg and build core strength.

Over the years, Lesnar has developed his weightlifting routine that brought out the best in his physique, which includes working on different body parts each day of the week and spending three days of rest to give time for muscle recovery.

You can check our article about Brock Lesnar's workout routine and diet.

While a healthy diet and regular exercise are certainly crucial for achieving your fitness goals, I have found that testosterone boosters derived from natural and legal substances usually accelerate the progress of my clients quite drastically.

Did Brock Admit to Taking Steroids?

Brock Lesnar admitted taking steroids following a positive drug assay. During one of his interviews, he was taken aback when he declared himself "white and jacked." He continued to sound agitated as he insisted that people should accept it.

Has Brock Lesnar Ever Been Banned For Using Steroids?

Brock Lesnar has been banned for using steroids after testing positive in a United States Anti-Doping Agency (Usada) drug test taken before his fight with Mark Hunt. It resulted in him being barred from fighting in the ring for two years, fined $250,000, and overturning his victory to a no-contest.

I think Brock is not using steroids nowadays because, in his recent photos, he has a much smaller and less ripped physique compared to his wrestling and MMA battle days.

It has taken me years to build my physique just through diet and exercise. But as I’ve witnessed with many of my clients, adding our recommended healthy and legal steroid alternatives to your regimen can significantly speed up the whole progress.

It has also allowed my clients to increase repetitions, reduce muscle cramps, and extend their workouts. 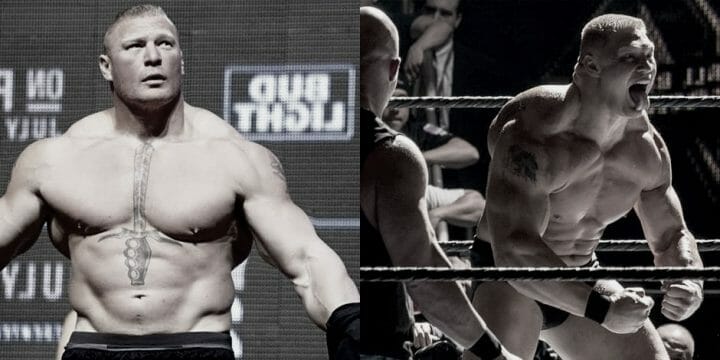 By Isaac Robertson 2 weeks ago
Is Stefi Cohen Natural or on Steroids? (Revealed)

By Isaac Robertson 3 months ago
Is Jinder Mahal Natural or on Steroids? (Revealed)