Was Ronnie Coleman On Steroids or Natural? (Revealed)

Eight-time Mr. Olympia Ronnie Coleman admitted on the June 2020 at Joe Rogan Experience podcast that he started taking steroids at 30.

As a long-time fitness instructor, I know that many bodybuilders use steroids to improve their performance. Many denied it, but a few, like Coleman, have come forward.

So, when I learned Coleman was using steroids, I spent hours of research to study his bodybuilding career.

This article will explain why the professional bodybuilding legend used performance-enhancing drugs (PEDs), how they aided his career, and the health issues he's currently dealing with due to his steroid use.

Ronnie Coleman, who is considered the greatest bodybuilder of all time, admitted to Joe Rogan that he began using prescription steroids when he was 30 years old.

Coleman started bodybuilding at the age of 24 and stayed all-natural for the first six years of his career.

One of Coleman's fellow competitors, Flex Wheeler, introduced him to PEDs when he was 30.

He claimed that he could gain mass, achieve his ideal body, rank up, and eventually win major titles by using performance enhancers because they made him shredded and conditioned as he had never been before.

What Made Ronnie Coleman Decide To Take Steroids?

Ronnie decided to take steroids when he realized he needed to gain the competitive advantage most bodybuilders seek.

Coleman's fellow competitors were overwhelmingly using performance enhancers, which was acceptable because androgenic-anabolic steroids (AAS) were a controlled substance at the time [1].

Furthermore, when he started using PEDs, he moved up the ranks and won annual bodybuilding competitions.

While many bodybuilders promote supplements such as creatine and BCAAs, Coleman believed he needed more to achieve his Mr. Olympia physique.

Ronnie has won eight Mr. Olympia championships in a row, tying him with another bodybuilding legend, Lee Haney, and giving him three more victories than Arnold Schwarzenegger, who won five Mr. Olympia titles.

Was Steroids A Factor In Coleman's Career Growth? After six years of being all-natural, he claims that his best finish was third because almost everyone seeks the competitive edge.

When Flex Wheeler taught him how to improve his game and began using performance enhancers, he quickly became more shredded and fit.

However, he claimed that PEDs did not significantly increase his strength.

During an interview, podcast host Rogan mentioned that he has excellent genetics.

Coleman told Rogan that genetics play a significant role in bodybuilding. And that a bodybuilder must have the natural ability to achieve an excellent physique [2].

He went on to say that because of his good genes, he can stop taking PEDs cold turkey over the offseason and not notice any difference in his body.

He attributes his massive lean muscles to steroid use, which he claims he took in precisely the right amounts as prescribed by doctors.

What Kind Of Steroids Did Ronnie Coleman Use?

Ronnie used doctor-prescribed performance enhancers. He didn't detail his cycle, but he admits to taking the same amount as other athletes.

He also confirmed that he never bought PEDs on the black market. Instead, he would obtain testosterone and growth hormone prescriptions from doctors and present them to Drug Enforcement Agency (DEA) officials during competition. 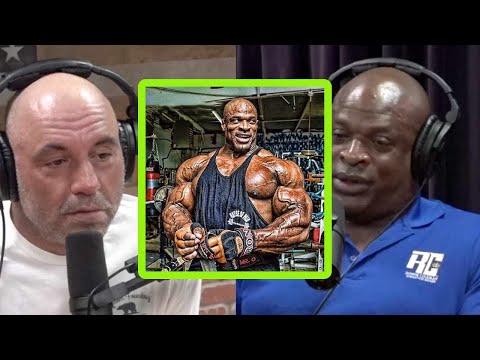 Was Ronnie Coleman Ever Banned For Using Steroids?

Ronnie was never banned for using performance enhancers because he did not test positive for illegal use.

The bodybuilder uses doctor-prescribed drugs, and because AAS was a controlled substance at the time, he was never caught using them illegally.

Does Coleman Have Health Issues Today Due To Steroid Use?

At 56, Ronnie has no health problems due to his steroid use.

In an interview, he confirmed to Rogan that he was able to reach the pinnacle of his career at Mr. Olympia without having chronic health problems.

Coleman says, "I don't have any health problems besides the injuries. My liver, kidneys, and heart are all good."

Furthermore, he was under medical supervision to monitor his hormonal levels.

Based on my research, Coleman has used doctor-prescribed PEDs to gain an equal share of the competitive advantage during his time, but he emphasizes that he does not encourage others to do so.

In today's modern world, where steroids are sold and abused irresponsibly, I recommend my clients to supplement their diet and workout with safe and legal substitutes to steroids, designed to effectively build muscle without the harmful side effects.

I've tested thousands of products, and these have consistently provided us with high levels of strength and endurance to level up our gym training.