As a fitness trainer for almost a decade, my clients and I have tested hundreds of pre-workout supplements, and we found that while most of them work to boost performance, some can really taste bad.

Since my clients are determined to improve their performance, they kept asking me how to make pre-workout taste better.

As a result, I asked my gym colleagues if they had tried adding any ingredients to improve the taste, and I spent a few weeks trying out strategies I found online and those suggested to me.

I summarized all the results in this article, so let’s dive right in.

Can You Make Pre-workout Taste Better? Yes, you can make your pre-workout taste better by adding ingredients and masking agents to your supplement powder.

Stevia, Splenda, and monk fruit extract may naturally enhance the taste of a bland pre-workout as they are considered natural sweeteners [1].

Moreover, some colleagues suggested sports drinks such as Gatorade and water-flavored drops can improve the taste of the pre-workout drink.

Fruits can also temper the spiciness and sourness of pre-workout drinks, while seasoning pre-workout powder with a pinch of salt can help to make it less bitter [2]. 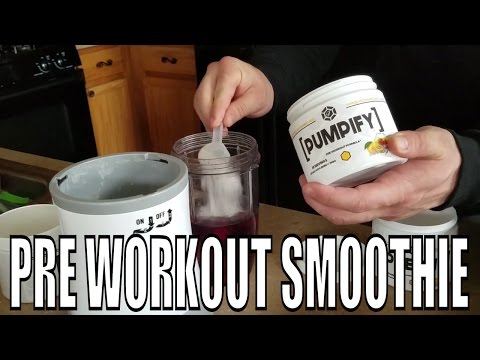 8 Ingredients to Make It Taste Better

Some ingredients can improve the taste of pre-workout drinks that are flavorless and hard to drink.

But, before you start modifying the taste of your pre-workouts, you need to know which ingredients may work for each type of flavor. Frozen fruits such as cherries, berries, bananas, and watermelons can be blended into your bland, bitter, or spicy pre-workout powder.

By adding berries and cherries to your supplement, you will not only improve its taste and sweetness but also boost your levels of antioxidants, which will help you stay healthy [3].

In addition, bananas added to sweeten pre-workout may help control appetite due to their high fiber content [5].

Natural fruit ingredients can be found in most stores and are certainly a better option than sports drinks containing artificial flavors and more sugar.

You can squeeze some fresh citrus fruits like lemon or lime into sweet and flavorless pre-workout and add orange to a spicy pre-workout.

Also, adding freshly squeezed lemon juice to your pre-workout not only makes it taste better but also speeds up recovery from muscular fatigue [7].

But if your pre-workout already tastes sour, you don't need to add these ingredients. Coconut water tastes significantly sweeter than plain water, and it can be effective for turning your bitter or sour pre-workout taste better.

Drinking coconut water before a workout has been shown to help people maintain their health and hydration due to the essential nutrients and electrolytes [8].

This is a better alternative to flavored beverages and commercialized sports drinks, which contain artificial flavors.

Using coconut or soy milk as the base for pre-workout can help improve the bitterness of the product.

Furthermore, adding milk does not only make your pre-workout taste better, but it also provides minerals, vitamins, and fats to keep your body energized throughout the day.

Also, milk naturally contains two types of proteins, such as casein and whey, which can help to improve muscle recovery after cardio and strength exercises [9]. Another way to sweeten a pre-workout that tastes bland is by mixing the powder with flavored water or water infused with citrus, berries, melons, fresh ginger, or mint.

Several health benefits of infused water with green tea, mint, and lime include fat burning and an immediate relief from headaches and nasal congestion [10].

"Proper hydration is critical for maintaining health on a cellular level. Every cell in the human body is reliant on water for proper function."

Moreover, infused water with strawberry and kiwi has been found to improve heart health, immunity, and blood sugar regulation [11].

Mixing pre-workout with cocoa powder and vanilla extract can help to mask the bitterness of pre-workout supplements.

Some pre-workout supplement manufacturers are already using cocoa powder in their chocolate-flavored pre-workout. However, they are often far too sweet.

That way, you can customize and balance the flavor of your drink. A scoop of low-fat vanilla ice cream and fat-free plain Greek yogurt can be a fun and tasty way to sweeten up your bland or spicy pre-workout.

Because 70 percent of ice cream comes from milk, adding low-fat ice cream to your workout drink may not only make you happier but may also give you more energy and help strengthen your bones [12].

Also, plain Greek yogurt has a lot of protein, which could be why so many people who work out find it to be the best snack.

You can use a low-fat version and add sliced fruit or granola to give yourself more energy for your workout.

Using coconut or soy milk as the base for pre-workout can help improve the bitterness of the product.

Furthermore, adding milk does not only make your pre-workout taste better, but it also provides minerals, vitamins, and fats to keep your body energized throughout the day.

Also, milk naturally contains two types of proteins, such as casein and whey, which can help to improve muscle recovery after cardio and strength exercises [9].

Why Does Pre-workout Taste Bad?

Pre-workout taste bad because they contain many chemical compounds that produce different tastes and flavors, such as sweet, sour, bitter, salty, or spicy. In addition, some pre-workouts are entirely tasteless.

The combination of multiple ingredients and the formulation of proprietary blends of these compounds are used to ensure high efficacy and distinguish supplements from one another. However, they do usually offer various flavors for pre-workouts.

Here are some common ingredients that make pre-workout taste bad:

Beta-Alanine - Beta-alanine in pre-workout, one of the primary constituents in most sports products, is perceived as a tasteless powder that, when mixed with water, adds no flavor, smell, or taste.

Creatine Monohydrate - Similar to other ingredients in pre-workout, creatine is said to taste bitter. According to a study, creatine was described by four out of five people as tasteless, while one considers it to be bitter tasting [14].

Caffeine - Caffeine is said to also taste bitter but researchers found that caffeine itself is naturally tasteless. The bitter taste receptors in the tongue's taste buds initiate the perception of having the taste [15]. However, there are some great options for pre-workout supplements without caffeine that we tested and really enjoyed.

Nitric Oxide - Some people describe the taste of supplements containing nitric oxide as being somewhat acidic or metallic, while others say that the supplements have a more sweet flavor [16].

Casein and Whey Protein  - Casein and whey protein's natural bland taste makes some muscle-building supplements hard to drink. Whey powder appears to have a better texture and flavor, while casein can sometimes feel lumpy and thick in the mouth [17].

Artificial Flavors - Other ingredients that make the supplement sour are artificial flavors that include citric acid and malic acid. In contrast, substances that mimic sugary tastes like saccharin and sucralose can make pre-workout overly sweet [18].

Pros And Cons Of Making Your Pre-Workout Taste Better Making your pre-workout more enticing will encourage you to take it regularly, resulting in a more productive workout and faster weight loss.

You can also ensure that it will not have any negative effects on your body by adding natural sweeteners in the appropriate amounts.

Furthermore, adding personal choice ingredients will not only improve its taste but also possibly boost your energy level or help you burn fat.

On the other hand, you'll have to spend time and effort researching the right ingredients and doing trial and error testing to complement its original taste.

Furthermore, the process may compromise the effectiveness of the supplement because you may not have all the information at first and must adjust the ingredients as you go.

Fruit punch is widely considered to be the best pre-workout flavor.

It received more than 40 percent of the votes in social media groups and forums. Watermelon punch, on the other hand, came in second and bubblegum ice cream flavor came in third.

What Should You Not Mix With Pre-workout?

You should not mix alcohol with pre-workout because the caffeine in it could react with the depressant effects of the alcohol, which can have negative effects on your heart and workout performance.

Also, there are health risks associated with adding carbonated drinks like sparkling water and Coca-Cola to pre-workout particularly those with a proprietary blend.

So, How to Make Pre-workout Taste Better?

After compiling all of my data, the best ways to make pre-workout taste better seem to be blending frozen fruits, mixing lemon water, and adding fat-free Greek yogurt.

However, doing all the research and testing to make pre-workout taste better may take a lot of time and effort.

This is why I usually recommend that my clients choose a high-quality, natural premade workout supplement that our team has tested for great flavor.

Our team has tried some of the best pre-workouts that have a great taste to help you save time, effort, and money so you can spend that time working out and reaching your goals.

For 3 years, he worked hard to build and develop his body while also working as a financial advisor in a private company. Eventually, he quit his day job and decided to do what he loves. He has now been a part of the fitness industry for 8 years and is a bodybuilding coach for Total Shape. 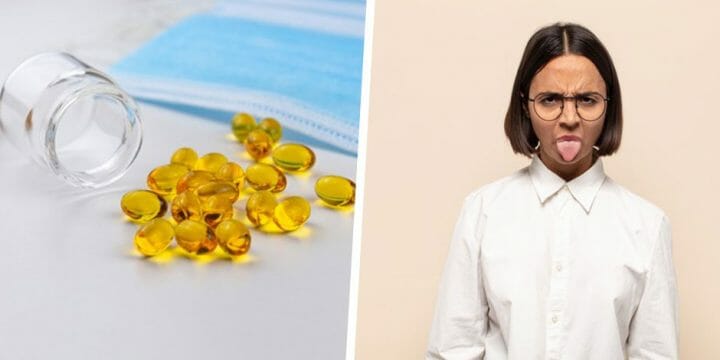 Supplements 2 months ago
How To Get Rid Of Fish Oil Taste?
5 Easy Ways