There’s something to be said about the old saying: “You punch like a girl.”

One woman, in particular, took this statement to heart and decided it’s not something to be ashamed of but to admire.

Like many other celebrity athletes, success for Rousey didn’t come naturally.

Ronda’s had to work diligently to maintain her physique and fitness, which we’ve spent hours delving into to research.

If you want to find out the exact steps behind Ronda Rousey’s rise to success, read on.

Who is Ronda Rousey?

Ronda Rousey is known for her achievements in MMA and considered one of the best fighters in take downs, judo, and striking.

Before being bought over by the UFC, Rousey would become the last ever Strikeforce Women’s Bantamweight Champion before quickly rising to fame.

Her achievements didn’t stop there - after her debut, she dominated the competition to become the first-ever female UFC Women’s Bantamweight Champion.

She also set the record for women’s all-time title defenses at six, and in the process, eliminated many of her opponents in just seconds within the first round.

After losing the title to Holly Holm, Rousey decided to set her sights on other endeavors and signed a contract with WWE in 2018.

Her passion for achievement was still apparent, prompting her to win the Raw Women’s Championship and defend it for 231 days, the second-longest in the title’s history.

Due to her success in industries primarily dominated by men, she has garnered a lot of attention.

Rousey is the only woman to ever win championships and headline pay-per-view events in both the UFC and WWE.

She has also appeared in a number of films that are not surprisingly action-themed. These include Furious 7, Mile 22, The Expendables 3, and a personal biography titled My Fight/Your Fight.

What Is Ronda Rousey's Workout Routine?

She typically works out 3-6 days a week, using Sundays as a rest day for recovery and therapy.

Rousey starts with a warm-up routine consisting of stretching, 10 minutes of skipping rope, kicks, as well as punches while holding a 2 lb dumbbell in each hand.

Here are her workout routines broken down for you:

She also incorporates bag work and drills, hitting the bag for hours until failure. 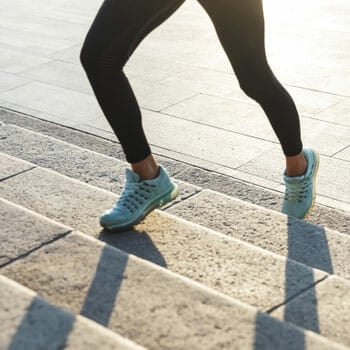 Her stair workout involves running the Santa Monica staircase with nearly 400 steps. She starts off her stair workout, running up the stairs one at a time.

Next, Ronda does the entire staircase again, except performing side steps leading with the left leg, then the right leg.

As if that isn’t enough, she’ll then go up the staircase two at a time and repeat the whole routine. In total, that’s about 2,400 steps in just one session!

She hasn’t spoken much about her swimming workout; however, knowing Ronda, she probably spends the entire day in the pool doing laps. 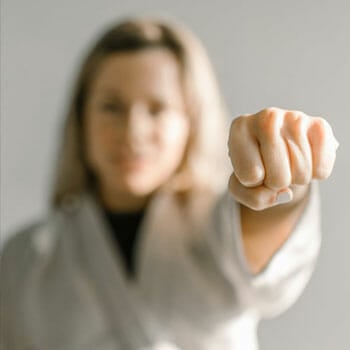 Building strength for Ronda is best done by targeting the core.

Holding her own in the octagon means having a strong center to support the body’s weight and allow for quick, explosive movements.

This means activities that target the abs, such as judo, wrestling, and jiu jitsu, are great choices for building muscle mass and core strength.

For weight training, her routine consists of the following:

What Is Ronda Rousey’s Diet?

It takes a lot of energy to beat the best fighters in the world.

To get the kind of fuel needed to perform at a top level, Ronda Rousey’s diet plan consists of a big breakfast, medium-sized lunch, and a small dinner.

Besides being the most important meal, it’s also her favorite meal of the day.

Her first meal is a bit simpler on fight days, opting for an ezekiel bread wrap with almond butter, hemp seeds, banana, berries, and honey.

She’s also got a thing for coffee, topping it with stevia, grass-fed butter, raw coconut oil, and cinnamon.

Ronda Rousey’s lunchtime consists of a number of greens alongside a good amount of protein. 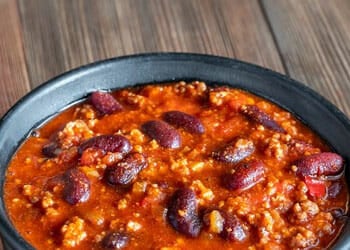 Her dinnertime meal is lighter than the previous two meals.

This helps with digestion and ensuring a good night’s sleep.

Her standard dinner meal is turkey chili, made up of 6 ounces of ground turkey, red and green bell peppers, ¼ cup of beans, cayenne pepper, chili pepper, and avocado.

Greek yogurt bowl with chia seeds and agave syrup, anyone? How about a baked tray of sweet potato yam chips and raw coconut oil?

Everyone’s got a sweet tooth, and for Rousey, she’s no different.

Unlike other athletes, however, Rousey does not take any cheat meals and instead sticks to a strict diet all year round.

(Although that doesn’t stop her from satisfying her cravings with greek yogurt!)

Additionally, Rousey keeps herself hydrated with coconut water, green tea, and plenty of water in between training sessions and meals.

The Quality over Calories Count

Rousey prefers to maximize nutrient levels instead of minimizing calorie intake, which helps her metabolism burn fat and extra weight.

Research supports Rousey’s claims, suggesting that high-quality foods should take importance over calorie count [1] and that:

“Total energy expenditure is influenced by age, sex, hormonal, and nutritional status and is related directly to body weight [2].”

What Supplements Does Ronda Take?

All athletes rely on supplements to perform at their peak, and Rousey is no different.

Supplements are such a vital component of her diet that she co-owns a supplement company called Max Effort.

The company produces creatine, pre and post-workout formulas, protein powders, multivitamins, joint supplements, and a greens supplement for those that don’t eat as many veggies as they should.

Not surprisingly, these are all a part of Rousey’s meal plan, which she takes to quicken muscle growth and recover from injuries and workouts.

What Weight Did Ronda Rousey Fight At?

Rousey fights at a number of weight brackets ranging from 135 - 150 lbs.

At the start of her career, she fought at 145 lbs before moving down to 135 lbs to make the Bantamweight class.

Her personal preference is at 150 lbs, where she feels her best.

What Does a Ufc Fighter Eat In a Day?

UFC fighters rely on a natural, whole foods diet to stay fit and in shape.

Common carbohydrates for a UFC fighter include rice, bread, or potatoes.

For proteins and fat, it’s up to the individual, with leaner meats consisting of chicken and fish and red meats including bacon, turkey, and beef.

Are You Going To Try Ronda's Workout & Meal Plan?

Rowdy Ronda’s made a name for herself and proven that women can be just as fearsome as men.

As a professional fighter and athlete, Rousey’s workout routine is best geared towards functional strength designed to help you achieve the physique needed to last five rounds.

Combined with an all-natural diet, you’ll get access to the essential nutrition your body needs to maintain optimal energy levels while shedding excessive weight.

Try it out today, and let us know how it’s working for you.

By Tracy Thompson 17 hours ago
The Calisthenics Diet
What To Eat & What Supplements To Take?