Bruce Lee is a legend. Period. Before his untimely death in 1973, he appeared in groundbreaking films like Enter the Dragon and Fist of Fury, which pushed kung fu into the mainstream around the world.

But the man behind the one-inch punch was also famous for his physique, so much so that you could literally see every fiber of his muscles.

In fact, he was so dedicated to training his body that his ideas on diet and exercise became an institution in and of itself.

So if you are eager to learn more information as to how he perfected his strength, agility, and senses, let’s look a little deeper at the legendary Bruce Lee workout routine for answers.

Looking like Bruce Lee is no mere feat, though. Those rock-hard abs, sinewy biceps, and V-shaped upper body muscles certainly required a lot of training and discipline. His martial arts career is a proof to that.

But let’s not forget that diet also played a huge role in sculpting his signature silhouette. So here are some of the perks to maintaining the Bruce Lee weight.

Cut Out Those ‘Empty Calories’

Bruce refused to consume any foods that he thought would not benefit him as a martial artist.

He would call refined flour “empty calories” and refrain from eating any baked goods like biscuits, cakes, or pastry. 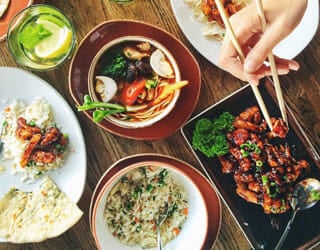 Even though he loved some pasta, Bruce Lee felt that Western food was often bland. That is why he opted primarily for food from his homeland.

Asian foodstuffs, such as rice and vegetables, are full of carbohydrates that are a very good source of energy.

Western foods, on the other hand, place more emphasis on fat and protein.

Bruce Lee's favorite food was beef in oyster sauce - a good source of both carbs and protein. These ingredients are essential for an active lifestyle that often includes landing power punches and lightning-quick leg work. Hiya! 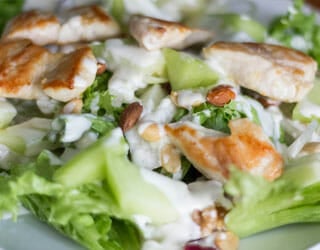 Rather than opting for a couple of larger meals, he would choose to have 4-5 smaller meals spread out throughout the day.

Bruce Lee also preferred to snack on fruits whenever he felt a bit peckish.

The reason why he believed it’s best to spread out his mealtimes was to ensure his metabolism did not fluctuate and any excess calories weren’t turned into fat.

Eating these smaller meal portions also allowed for more manageable calorie intake during each mealtime and guaranteed influx of energy during a workout.

Bruce Lee would often talk about how he would get a boost before filming his scenes by drinking royal jelly, which is made from the honey of the queen bee.

According to Chinese culture, ginseng is said to promote ‘Yang’ energy. Science has proven that it may help improve your circulation and blood supply [1].

In order to maintain his physique and build muscle mass, Bruce Lee made sure he consumed adequate amounts of protein on a daily basis to supplement his martial arts and weight training.

He would consume 2 protein drinks per day, every day. These would be made by mixing:

Bruce Lee was also a huge fan of vitamin and mineral supplements, believing that every percent of improvement is significant.

Protein is incredibly important for health and bodybuilding. If you are not getting enough through your diet alone (and are no stranger to muscle exercise too), you should consider adding a protein supplement to get the most from your workout routines.

This supplement is sourced from grass-fed American cows with each 32-gram serving offering an industry high protein-by-weight ratio of 88%. That means an incredible 28 grams of protein is present in each scoop.

Tea Time In The Gym? 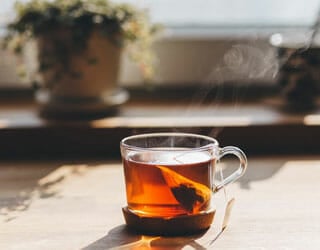 Bruce Lee rarely skipped tea time. Even during training, he often drank a variety of different types of tea, which were usually mixed with honey.

Certain types of tea contain various antioxidants that can boost your immune system, such as green tea for example [2].

His favorite brand was Lipton or a Chinese tea called Li-Cha.

Celebrities Rumored to Be Juicing: 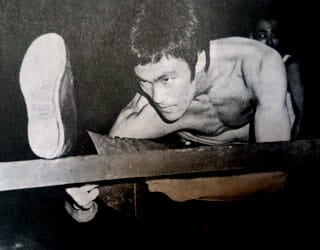 The diaries thoroughly detailed Bruce Lee's methods that he explored, which helped him perfect his signature martial arts and overall training program.

He was a proponent of various techniques and training methods.

Over time and through rigorous experimentation, he created his own style, Jeet Kune Do - a style that is practiced even today by numerous martial artists.

During his humble beginnings in 1963, his workout mainly included your typical martial arts training routine. The initial Bruce Lee workout routine consisted of various punching and kicking exercises that stemmed from his training in Wing Chun Gun Fu and Sil Lum Tao.

It was during this period that the man behind the legend started to develop his work ethic, spending 3 or more hours of training on a wooden dummy.

But his personal diaries also demonstrate how his training program evolved as years passed. In 1965, Mr. Lee felt the need to expand his craft, so he started to incorporate more cardiovascular exercises into his workout routines.

Bruce Lee’s updated training programs would also start to include cycling, running, and use of jump rope to increase endurance and stamina. With the goal to gain strength in his forearms and abdominals, he began to experiment with barbells and specialized exercises.

As the 1960s drew to a close, Bruce Lee slowly moved away from more traditional martial arts training and began to incorporate more Western-style boxing techniques in his training.

It was in 1970 that he started to focus on his workouts to support his martial arts. Besides his usual workout routine, he began to add weight training, heavy bag work, speed bag work, and stretching techniques.

This became known as cross-training - a staple exercise in modern gyms because it incorporates aerobics, strength training, and muscle flexibility.

The reason for incorporating cross-training into his workout routines was to further enhance his speed, strength, flexibility, and endurance.

Below, you will find the digested Bruce Lee workout routine. As you can see, he alternates his training to allow each body part enough rest.

Also, bear in mind that he would always work on his abs and do basic stretching, both of which were seen as a core asset of his workout regime since its inception.

The Bruce Lee workout routine is intense. Here's an overview of how he did his trainings.

He would also use the following:

As you can see, Bruce would power through each exercise every day of the week, with very little rest in between. He would basically exercise the entire day.

If you don’t believe us, Chuck Norris stated that Bruce Lee was the hardest working man he had ever met:

“No other human being had ever trained the way Bruce trained-fanatically. He lived and breathed it from the time he got up at six o’clock in the morning until he went to bed at night.”

Workout Routines of other Celebrities:

Is It Possible To Achieve A Similar Physique As Bruce Lee?

If you follow the Bruce Lee workout routine, it is certainly possible to achieve his physique.

Of course, genetics has a part to play but dedication to your goals is the most important thing to have regardless of your body type and predispositions.

Trust when we say, if you dedicate yourself to the Bruce Lee workout regime, you will discover a whole new world of personal fitness. This includes an increase in muscle mass, reduction in body fat, keener senses, more power, and show-stopping agility.

But remember, the key is to eat as healthy as possible and to work out regularly with sufficient intensity.

We hope that you find this information useful and if you need any extra motivation or want to train like Bruce, just ask the master himself. After all, he wrote the book and changed the rules.

Read our review of other Celebrity Action Stars:

Equipment 10 months ago
Bowflex vs PowerBlock Dumbbell
Which One Is Better?