Usain Bolt has set multiple world records by defeating other sprinters who tested positive for performance-enhancing drugs, making the athletic world wonder if he is also on steroids.

As a fitness instructor, I have worked with several athletes who use banned substances, so it's easy for me to tell if someone is natty or not. In addition, I spent two weeks investigating Bolt’s athletic history, diet, and workout routine to determine whether his speed is a natural talent.

So, keep reading this article to learn about the findings of my investigation.

Usain Bolt may not be using performance-enhancing drugs (PEDs) because he lacks steroid-related signs such as acne, enlarged breasts, sudden massive mass gains, and rapid deterioration of health.

Furthermore, his outstanding sprinting skills can be attributed to his diet, workout regimen, and running techniques.

According to studies, human running speed is not biologically limited, and sprinters can run faster by hitting the ground harder and more quickly [1] [2].

In short, Usain probably has set the current 100-meter world record of 9.58 seconds by spending years honing his muscles' ability to fire up and generate force quickly.

To top it off, there are no reported instances of Bolt testing positive for any banned substance.

Many people believe Bolt uses PEDs for the following reasons:

Usain won a gold medal in the 200 meters at the Junior World Championships at 15, set a new world mark at 16, and became the first teenager to break the 20-second record in the race at 17 [3]. These results are disproportionately extreme even by Jamaican standards.

Bolt's performance improved significantly in a year, increasing by 0.34 seconds. In an almost unnaturally short time frame, he went from running the 100-meters in 10.03 seconds in 2007 to breaking the record a year later with 9.69 seconds [4].

Attitude towards PEDs in Jamaica

Researchers revealed that Jamaica lacks out-of-competition testing, creating their anti-doping agency only in 2008, and conducting drug tests that were not very rigorous [5].

He has achieved his speed and won gold medals in most of his competitions by maximizing his physiological advantage, consuming appropriate foods, and following a training program that is tailored to his needs.

Is His Speed Possible Without Steroids? Usain Bolt's speed is possible without drug use because he stands at 6 feet 5 inches, giving him a stride advantage.

His long stride enables him to run at a higher speed.

According to research, an optimal link exists between stride length and stride rate when producing speed. As speed increases, step length and pace also increase [6].

What Would It Take To Perform and Look Like Her?

In my opinion, it would take excellent genetics, proper nutrition, and consistent training to run as fast as Usain.

Usain shifted his love for fast foods to a healthier alternative. He also claims he only eats moderately to ensure proper digestion before his workout.

Throughout the day, he snacks on fruits, consumes energy drinks and takes men's vitamin tablets[7].

Some of the additional supplements he is known to take are fish oil, magnesium, green superfood powder, and BCAAs for men[8]. According to his social media profiles, Usain trains six days a week for eleven months, His total-body training plan comprises the following:

According to one of his interviews, Usain Bolt's training gives him confidence, which provides him with a good state of mind that helps him perform effectively.

“I know what I can do, so I never doubt myself.”

Indeed, genetics, nutrition, and exercise are essential to achieving your fitness goals.

However, if you’re not born with good genetics, you can push those genetic limitations to a certain degree by taking an all-natural bulking stack based on legal steroid alternatives.

These supplements are made from herbs, vitamins, and minerals that work to boost your testosterone production, increasing stamina, strength, explosiveness, and speed.

Was Usain Tested for Steroid Use?

The World Athletics and the International Olympic Committee (IOC) must’ve tested Usain for drugs following his participation in the World Championships and Olympic Games.

Although he has never failed a single drug test, skeptics view him as a suspect due to some top athletes who were caught doping, including Ben Johnson, Carl Lewis, Marion Jones, and Asafa Powell [9] [10].

Has Usain Ever Been Banned for Using Steroids?

Usain has never been banned from competing due to steroid use. He was permitted to compete in many World Championships and Olympic Games, winning numerous gold medals.

Does Usain Have Health Issues Due to Steroids?

Usain has not experienced any steroid-related health issues. Aside from the severe hamstring injury he suffered in 2017, his other health issue is scoliosis, but he has none of the common consequences of PEDs like kidney or liver damage.

My research has led me to conclude Usain Bolt didn't use a banned substance to break world records. He was constantly drug tested, and he always came out clean.

Furthermore, his long stride and running techniques, along with a proper diet and workout, may have contributed to his stamina and speed.

I believe that with the right training regimen and diet, it is truly possible for anyone to reach fitness goals faster. However, I constantly advise my clients to use our recommended legal steroid alternatives that is free of illegal substances when they want to fast-track their fitness journey.

It has proved to be reliable at boosting performance and increasing the strength and metabolism of my clients and me, without common side effects of anabolic steroids. 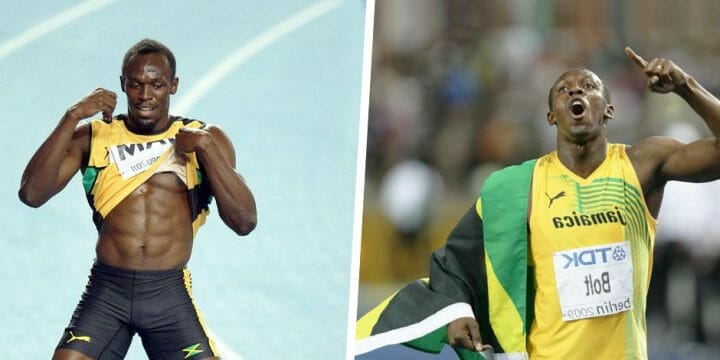 By Liam Johnson 4 months ago
Is Lebron James on Steroids? (Deep Investigation) By Liam Johnson 4 months ago
Is Vin Diesel On Steroids? (Deep Investigation) By Liam Johnson 2 weeks ago
Is Serena Williams on Steroids? (Deep Investigation)