Is Vitaly on Steroids or Natural? (Revealed)

Vitaly Zdorovetskiy is a Russian-American YouTuber with a strong following, most famous for his “Do you even lift, bro?” video. His YouTube channel features videos on his vlogs and him being a prankster.

As Vitaly got more jacked, the most asked question among his fans was whether he was on a steroid cycle, which Vitaly himself admitted.

I’ve known and studied many folks who’ve done steroids in the past and can spot the effects when I see them. And Vitaly shows some of those effects.

So, we will analyze Vitaly’s, views on steroids and the signs of his steroid use.

Why Did Vitaly Zdorovetskiy Take Steroids?

Initially, Zdorovetskiy lied about not taking steroids. But in 2019, he came clean about his steroid use in a video on the YouTube channel, No Jumper.

In a 2019 video, he discussed various kinds of substances he took and those he still takes.

He fully admitted to having been on steroids for three years and has no plans on stopping anytime soon because he aims at insane results. 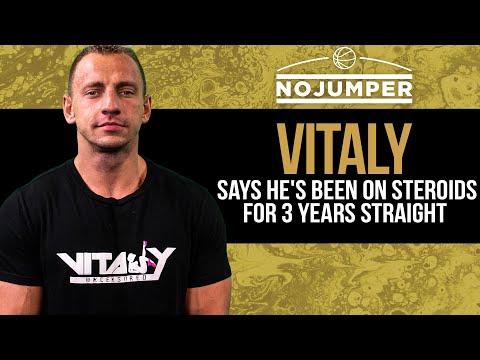 What Steroids Did Vitaly Tak

Zdorovetskiy said that he takes Cialis (tadalafil) for his workouts, which gives him a great pump. This is most likely true as a 2017 study showed tadalafil is effective for building lean muscles [1].

He also mentioned that he used to take trenbolone but stopped. He then switched to human growth hormone, which he claims helps his organs function better.

Vitaly seemed to have a positive outlook on his steroid use and didn’t show any signs of wanting to get off his cycle.

In an interview, he stated that he wanted to clear the misconception that taking steroids doesn’t require putting in the work. He explained that steroids made him even more disciplined than before.

“People think steroids are like magic: you shoot it up, and you're going to look like this. No, my discipline is crazy”

Keep in mind that Zdorovetskiy claimed he does not abuse steroids. He takes them responsibly, meaning that he gets monthly blood work and checks with his doctors to ensure he’s good to continue his cycle.

He even stated that what he takes is FDA approved because he wants only clean substances in his body.

Signs That Vitaly is On Steroids

Here are some apparent signs that indicate Vitaly’s use of steroids.

The first thing I notice with most steroid users is their hair-loss pattern, and Zdorovetskiy definitely shows this symptom.

If you look at his earlier content, when he was skinny, you’ll notice a lot more hair and a proper hairline.

Hair loss can occur due to the intake of high levels of testosterone [2]. And Vitaly admitted to taking testosterone three times a week. On the No Jumper video, Zdorovetskiy told his host he thinks his body is fat.

He even displayed his highly-toned six-pack with a sense of apathy.

A 2016 study showed a strong association between anabolic steroid use and body image issues [3].

His negative and apathetic view of his body could be the result of his steroid use.

In 2020, Zdorovetskiy was arrested and charged with aggravated battery for attacking a jogger. The victim was out for a jog when Zdorovetskiy tackled her to the ground, straddled her, and proceeded to punch her in the face and chest.

Whether or not Vitaly knew the woman isn’t certain. However, we know that steroid abuse tends to make men act violently towards women [4].

Such violent behavior leads me to believe that Vitaly’s steroids cycle is not as clean as he claims it to be.

Is It Possible To Look Like Vitaly Zdorovetskiy Without Drugs? It’s very rare to find a guy who can build a body like Zdorovetskiy’s without drugs.

For example, his shredded six-pack is extremely neat and defined — not something obtainable by natural means.

However, with the right nutrition, intense cardio, lifting heavy weights, and years of training, you can naturally achieve a physique that’s within your genetic peak.

To circumvent your genetic limitations a bit, you should consider testosterone boosters which can increase your stamina, strength, and testosterone production and make your muscle growth much more effective.

How Often Does Vitaly Run Steroids?

In an interview, Vitaly stated that he runs testosterone three times a week (in addition to other PEDs).

Didn’t Vitaly Hide His Steroid Use?

Yes, he lied about it initially. But, he later came clean about his steroids cycle.

Is Vitaly Zdorovetskiy Still on Steroids?

Whether Vitaly is currently on steroids is unknown. But given his admission that he doesn’t plan on stopping, I believe that he is still running gear.

Like most professional bodybuilders, aside from steroids, Vitaly’s transformation came with a lot of hard work, discipline, and dedication. In my experience, it’s better to gain the results of an insane physique naturally.

That’s why I recommend safe and legal steroid alternatives to all my clients and readers.  These supplements can give you the natural testosterone boost required to gain strength muscle and build a ripped physique significantly faster.

Dr. Smith earned his degree in Biology from the University of Florida, then went on to Florida Atlantic University for his medical degree. He focuses on preventative medicine and is planning to venture into acute and chronic pain management through various multi-modal interventions.

By Jordan Smith 13 hours ago
The Calisthenics Diet
What To Eat & What Supplements To Take?

By Jordan Smith 2 weeks ago
Is Stefi Cohen Natural or on Steroids? (Revealed)

By Jordan Smith 3 months ago
Is Jinder Mahal Natural or on Steroids? (Revealed)