Is Jesse Norris on Steroids or Natural? (Revealed)

Before getting into powerlifting, Norris played football and track and field. He began powerlifting at 14 to train himself as an athlete.

I’ve coached and assisted many athletes for their powerlifting and weightlifting contests, and I’ve closely observed how men in the 198-lb category lift. Norris’s total weight lifted goes way beyond what’s typically pulled in his weight category, which makes me suspect he’s not drug-free.

So, after much research and analysis on his strength and physique, I’m going to shed light on his possible steroid use.

Jesse Norris’s Signs of Steroid Use

In a 2015 video interview with Mark Bell, Jesse stated, “I don't want to sit here and say I'm natural. But regardless, I would like to show people that it is possible to train without performance-enhancing drugs and be successful.”

Although he has not made a public statement about using steroids, there are a couple of observable signs that show he potentially used PEDs outside of competition. 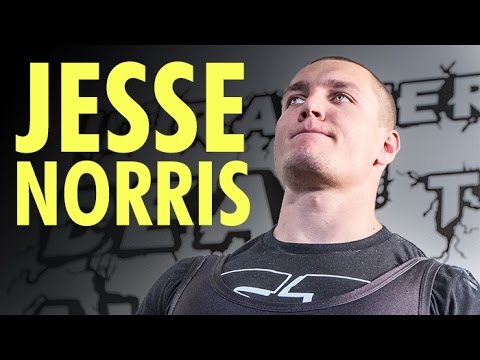 Norris is known for some of the most incredible lifts in his weight category (see stats below).

He is one of few athletes whose bench, squat, and deadlift total is ten times his own bodyweight.

Given his age, such strength is highly uncommon, which makes me suspect that he most likely took PEDs to boost his strength and performance [1].

Take a close look at some of Jesse’s photos. You’ll notice that he seems to show symptoms of pseudogynecomastia (one of the most common forms of gynecomastia): puffy nipples.

A 2001 study found that anabolic steroid consumption is one of the leading causes of gynecomastia [2].

And gynecomastia is commonly found among bodybuilders who consume anabolic steroids.

Although Jesse’s symptoms don’t seem too severe, the light presence of pseudogynecomastia could indicate that he possibly took anabolic steroids. But we can’t be certain since pseudogynecomastia is also caused by hormonal imbalance from other factors.

In 2016, Norris would compete in a federation that required he be drug tested, and he was found positive for banned stimulants.

Given that he knew they’d administer a drug test, it could have been an honest mistake on his part.

However, in Jesse’s case, the failed drug test was not because of steroids but a pre-workout that was no longer in the market (Craze).

It was known for containing chemicals similar to those in methamphetamines.

Is It Possible to Naturally Obtain Jesse Norris’s Strength and Physique?

For his bodyweight, it’s most likely not possible to obtain Norris’s strength and physique naturally unless you’re one of few genetically gifted men.

Many powerlifters are limited by their genetics, which is why I recommend you take a natural bulking stack to push beyond your genetic peak.

I especially recommend this if you’re competing in weightlifting and powerlifting.

What Would It Take To Bulk Up Like the Norris?

Norris is fairly liberal with his diet plan. He consumes as much protein as he can while avoiding fats. And he sticks to only clean carb sources such as whole-grain pasta, brown rice, and sweet potato.

Like most professional athletes, Norris takes his sport seriously and trains six to seven times a week. He only takes a rest day when he feels his body truly needs it.

He lifts extremely heavy weights in the two-to-eight rep range. He sometimes throws in a higher rep range to assist with muscle hypertrophy.

Norris doesn’t necessarily follow a strict program and simply lifts based on what his body requires.

“He's [Norris] freaking savage, but he expects a lot from himself. He's not too concerned with what other people are lifting. He's trying to push himself to the limits.”

Has Jesse Norris Ever Been Banned for Using Steroids?

No. Norris was never banned for steroid use, but he was suspended after a failed drug test for taking the pre-workout Craze — a stimulant disallowed by the federation in which he was competing.

Does Jesse Norris Have Health Issues Due to Steroids?

Norris does not seem to display any health issues related to steroid use.

Is Jesse Norris a Steroid User?

Being one of the strongest athletes for his weight category raises suspicion about Norris’s steroids use. Although he has tested positive for banned substances, his failed drug test was not on account of steroids.

But because he still competes in untested competitions, I suspect he most likely took PEDs, but we can’t say for certain.

If you’re a powerlifter looking to build your numbers, I highly suggest doing so using powerful legal alternatives to steroids. It will naturally boost your testosterone levels, enhance muscle growth, and increase strength — everything you need to kill your next contest.

By Connor Sellers 20 hours ago
The Calisthenics Diet
What To Eat & What Supplements To Take?

By Connor Sellers 2 weeks ago
Is Stefi Cohen Natural or on Steroids? (Revealed)

By Connor Sellers 3 months ago
Is Jinder Mahal Natural or on Steroids? (Revealed)