Jonah Hill's weight loss journey has been far from linear, but he's indeed come a long way since the early days of his career.

We searched the web high and low for the Hollywood actor's old interviews to find his secret to shedding all those extra pounds.

And after hours of researching, we've covered all there is to know for you.

His Rise To Fame

Jonah Hill started writing and acting in plays while attending college in The New School in New York City.

The actor eventually gained celebrity status by starring in the Hollywood blockbusters "Superbad," where he played a leading role, and the film "Moneyball," for which he got an Oscar nomination for his role as Peter Brand.

Hill also worked on the scripts of action-comedy films "21 Jump Street" and "22 Jump Street," where he starred alongside Channing Tatum.

Here's what the Hollywood icon did to lose all his excess body weight.

In his interviews, Jonah Hill never really mentioned anything about following a structured workout plan.

What eased him into exercising was running, as it required minimal equipment and could be done anywhere.

Due to a friend's recommendation, Hill also started doing 10 push-ups a day and eventually worked his way up to 100.

Hill dabbled in the Brazilian self-defense martial art jiu-jitsu, practicing four to five times a week. He also got into boxing and was often seen training at the celeb hot spot, Gotham Gym.

Once he committed to a routine, Jonah Hill made sure he spent at least 8+ hours working out each week, no matter his work schedule.

He diversified his workouts and did a combination of running, boxing, and resistance training.

"I found that people like rules, and I love to tell people what to do. It's not rocket science when it comes to weight loss. It's about eating a little less and moving a little bit more." 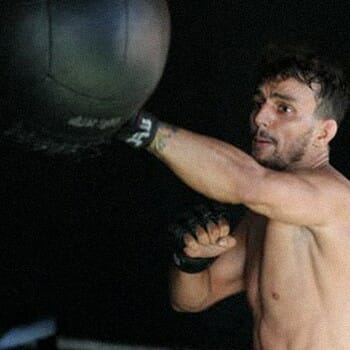 Before starting his weight loss journey, the person he first went to for advice was his co-actor and good friend Channing Tatum.

Hill asked him if eating less and going to a trainer will help him get in better shape. Tatum, of course, agreed, telling him that “it’s the simplest thing in the entire world.”

His Workout And Life Principles

Jonah Hill's decision to lose weight wasn't for vanity reasons or even for acting roles.

His motivation for slimming down goes far beyond his career aspirations, saying that the driving force behind it is for him to feel good and healthier.

Jonah Hill's weight fluctuated for years, and growing up in the spotlight playing the role of a fat guy in films also didn't help. In fact, it really took a toll on his mental health.

In an interview, Hill said it took a long time before he was able to reveal who he was as a person instead of pretending to be something that he’s not.

In 2011, Hill debuted his slimmed-down look when he lost 40 pounds after changing his lifestyle and dietary patterns.

He cut back on pizza and beer and ate plenty of sushi instead.

This Japanese dish is a great diet food since most kinds are relatively low in calories. For example, a six-piece sushi roll made with fish and vegetables typically has 200 to 250 calories.

However, he eventually regained the weight for his role in "War Dogs." After filming was over, Jonah Hill sought the guidance of a nutritionist, who told him to keep a food journal.

Keeping track of his food intake every day helped him determine where he needed to cut back on or add to his diet.

He sent his food journal to his nutritionist regularly, and the feedback he got from that also helped him lose weight.

He steered clear of

However, Hill admits that he still drinks beer. The Hollywood comedian wishes he could give it up, though, because he sees that he’s thinner without it.

Growing up, he listened to many people tell him that he was "fat, gross, and unattractive" because of his weight.

In a sit-down interview with Ellen DeGeneres, Hill said he thinks that everyone has a version of themselves—a “snapshot,” as he calls it—that they’re trying to hide from the world.

He said people carry some part of that with them, no matter where they get in life.

For him, it’s his 14-year-old self who was overweight and struggling to fit in with his peers. As a kid, Hill felt lonely back then because he didn’t understand his worth.

But as he grew older, he learned to have a healthier view of himself regardless of where his weight was at. Now, both his mental health and confidence have improved.

As for the secrets to his weight loss, Hill says it's all pretty straightforward. He didn’t rely on any magic “pill” or “genie.”

Instead, he went to a nutritionist who will guide him towards changing his habits.

What Supplements Does Jonah Take?

Jonah Hill doesn't advocate for any supplements, but the ones listed below can effectively fill some nutritional gaps for individuals with similar diets trying to speed up their weight loss.

Multivitamin: You can never go wrong with a multivitamin. Just make sure to buy from a reputable brand that manufactures high-quality health products.

Fish oil: If you’re not a fan of sushi, fish oil supplements are a good alternative because it’s rich in anti-inflammatory omega-3s [1].

Protein: A protein supplement will help fill you up when you’re on a caloric deficit and aid in building muscle [2].

I've followed Hill's weight loss journey since it started, and what I appreciate most about it are his sustainable methods.

His exercise routine and food plan can be easily replicated even by ordinary folks with no access to dietitians and expensive gym memberships.

Still, it would take a tremendous amount of hard work to mimic his accomplishments.

But if you follow his steps, I'm confident that you'll be able to achieve your weight loss goals, just like he did.

Try this Jonah Hill weight loss regimen and let us know how it works out for you in the comments below.

Supplements 1 month ago
Are Protein Shakes Safe During Pregnancy and While Nursing?