Is Bradley Martyn Natural or on Steroids (Revealed)

Throughout my years as a fitness coach, I've trained various athletes. Some preferred to remain natural, while others used performance-enhancing drugs.

So, I was quite intrigued when rumors about Bradley Martyn's steroid use began to spread.

I discovered that what gave people the idea of Bradley Martyn using steroids was a dramatic change in his body that can be seen from his old and new internet photos.

This article will discuss other physical changes in Bradley Martyn's body, his workout style, and whether he has tested positive for drugs, which can help you determine whether or not he is using steroids.

Physical Signs of Martyn's Steroid Use

Bradley Martyn's transformation over the years can be attributed to steroids use.

Bradley Martyn's continued muscle building over the years has resulted in massive growth despite having an already excellent physique, suggesting that he isn't all-natural.

Here are some physical signs that Bradley Martyn may be taking steroids.

Bradley Martyn has a natural-looking body that gives people a natty impression of him. However, his extreme muscle thickness is a prominent physical characteristic that stands out.

Deca Durabolin causes muscle bellies to expand and round, which might have given Bradley Martyn's arms and traps a thick appearance in certain photos. Bradley Martyn's skin appears very red and flushed in some pictures posted on the internet.

Rumor has it that this is due to steroid use.

Anabolic-androgenic steroids (AAS) can cause a rise in body temperature due to increased blood pressure, resulting in flushed or reddish skin in their users [3].

"The results provide scientific evidence that anabolic steroids cause hypertension that may be associated with increased risk of cardiovascular disease."

Although bodybuilders with intense, regular workouts may also appear a little flushed, certain photos of Bradly Martyn show that his skin isn't just a little pink but that his entire upper body is all flushed and red.

Bradley Martyn had previously competed in several NPC amateur bodybuilding shows and had passed the pre-competition drug tests administered by the federation.

Furthermore, there was no evidence on any NPC's websites that any candidates, including Bradley Martyn, had used steroids.

The only tests available are for HIV drugs, which are incapable of detecting steroid users.

Although the NPC federation claims to hold natural bodybuilding competitions, it has a "not-so" good reputation for catching steroid users.

According to some NPC competitors, bodybuilders can be tested for drugs, but the tests are simple to pass and pose little risk if the bodybuilder isn't on a steroid stack at the time of the test.

Bodybuilder Bradley Martyn started lifting weights at a young age and continued to do so for many years to develop significant muscle mass.

He further rose to prominence as a bodybuilder after competing in the National Physique Committee (NPC) amateur bodybuilding show in 2011.

He learned a lot about intermittent fasting, proper nutrition, and supplement use during this time.

He then applied his knowledge by launching his fitness program, BMFIT brand, and YouTube channel in 2014, which proved pivotal in his social media career and rose to fame [4].

So although Bradley Martyn has not won many competitions, millions of his social media fans admire him for his excellent physique, huge muscle mass, and low body fat percentage.

Let's take a look at his current stats:

Bradley Martyn's workout style is unique. In one of his interviews, he admitted that he never sticks to a workout routine and never follows an exercise plan.

He believes in listening to his body and training for at least one and a half hours per session, with a ten rep range that is 75 to 80 percent of his maximum.

He also conditions his body on certain days with cardio outdoor activities like pushing, pulling, and tire flipping [5].

To top it off, you can see Bradley Martyn doing a comfortable bench press at 405 lbs with a close-grip while he continues to rip triceps with his insane level of strength.

It has been rumored that Arnold Schwarzenegger used Dianabol and Deca during his career as a bodybuilder, in which he won five Mr. Universe titles and six Mr. Olympia titles [6].

Bradley Martyn has extremely thick muscles that may be attributed to the most famous steroid Deca.

Furthermore, several legends, including Mike Mentzer and Sergio Oliva, were rumored to have used it.

Dianabol is another famous steroid that bodybuilders use to help them gain strength and muscle mass.

It can, however, give a dry and shredded appearance, making steroid users easy to spot.

Is Bradley Martyn On Steroids, Or Is He Natural?

Bradley Martyn currently does not deny nor agree on social media that he’s been taking steroids. We can only rely on the fact that he never failed a single drug test.

In brief, physical signs alone will not establish a basis to prove that Bradley Martyn is a steroid user unless he tests positive for specific steroids.

The evidence that his reddish top body part is more prominent than his lower body is not enough reason to accuse him of using steroids.

However, you can achieve a muscular physique by eating well, lifting proper weights, and using natural and legal steroid supplements. 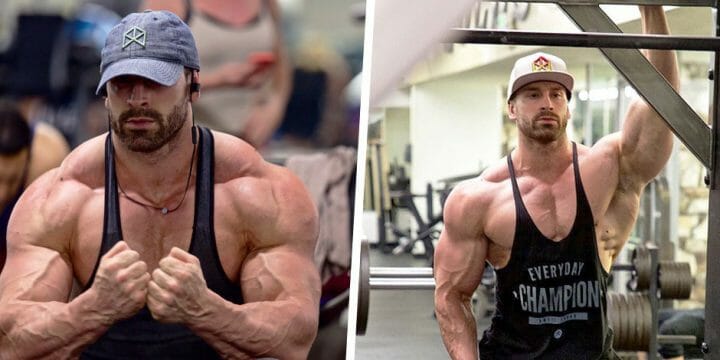 Fitness 2 months ago
Is Stefi Cohen Natural or on Steroids? (Revealed)