Is Hugh Jackman on Steroids or Natural? (What We Found Out)

Australian actor Hugh Jackman brags one of the best physiques in Hollywood. ​​Some people speculate that for his most famous role as Wolverine, he bulked up his physique with the help of performance-enhancing drugs.

Since most celebrities keep their steroid use under the rug, I've spent several weeks examining Jackman's interviews, photos, and various records over the years to determine if there's any merit to those speculations.

In this article, we will look at Hugh Jackman’s physique and transformation to assess whether he is a user of anabolic steroids.

3 Reasons Why People Believe Hugh Jackman Might Be On Steroids

Jackman’s most incredible change was for his role in Les Miserables and as Wolverine in X-Men: Days of Future Past in 2014.

So, we’re going to explore the possibility of whether he used steroids to achieve the great body he had during his role in Wolverine.

Below are some of Jackman’s externals that raise doubts about whether he was taking steroids or not.

If you notice Hugh's skin in Days of Future Past, it looks pretty flushed. In some scenes, Hugh's chest and neck are extremely red.

Flushed skin is usually the result of high body temperature, which further indicates high thermogenic activity in the body. Steroids are known to cause this [1].

Clenbuterol, is known for this effect [2]. People who take clenbuterol experience an increase in the body’s temperature and blood pressure due to central nervous system stimulation.

This might indicate that he was using steroids at the time, but we cannot be sure. 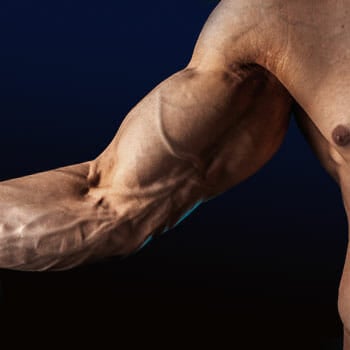 What characterized Hugh’s appearance at his peak was his highly vascular look. Not only did he put on muscle, but he had bulging veins, denoting low body fat content.

It is possible to develop a vascular look by natural means, but Hugh put on a decent amount of muscle, given his age, while shedding a good deal of body fat.

This steroid raises the temperature of the body, and the system uses calories both to heat up and cool itself down.

Jackman’s more vascular appearance in the movies mentioned above could indicate potential steroid use.

If you notice Jackman’s roles at a younger age, like the first X-men movie (around his early 30s), compared to his 2014 role (at 45 years old), his body composition in the former looks more skinny, natural, and achievable.

Studies show that one of the many factors of low testosterone is aging (after t-levels have reached their peak in one’s 20s) [4,5].

Since aging is a crucial factor in lowering testosterone levels, it would make more sense to have seen a bulkier Hugh Jackman in the earlier movies than in the later ones.

Yet, the older he gets, we see him putting on more muscle for his roles. Jackman bulked up within a short period for his later movie, given his age. Although we can’t be certain, this does raise some suspicion of him being on a steroid cycle at that time.

“There is almost no doubt in my mind that he is enhanced, and at minimum, on TRT, but likely on something super physiological.” Hugh Jackman claimed that he obtained a ripped look from working out with light weights, which helped him prepare for the heavier weight he had to lift later.

Jackman says, “If the bar ain't bendin, then you're just pretendin.” [6]

He also stated that he had to go through grueling workouts, diets, and even dehydration to stay lean [7].

If Jackman’s look in earlier roles is what you’re looking to achieve, then it’s possible.

If you’re aiming for the Wolverine look, then you’ll need to stick to a stringent diet, count your calories, shred fat, and build (and maintain) your muscle with intense weight training.

You will also need to have a genetic predisposition to gain Wolverine’s muscular shape and look.

What Would It Take To Bulk Up Like Hugh Jackman? 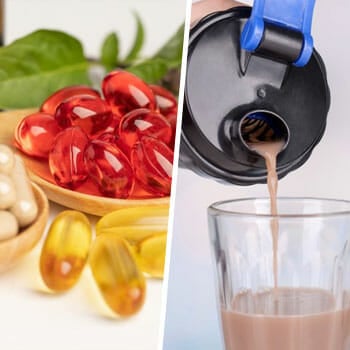 Hugh Jackman is 6’3”, and not everyone has his body type.

So keep in mind that working out to look like him could be a different journey for you.

While strict diet and strenuous exercise are crucial to look like the Wolverine, you might also need supplements such as multivitamins for men and testosterone boosters to fast-track your progress or, depending on the case, even make it likely at all.

There are some high-quality steroid alternatives and bulking stacks on the market you might want to look into.

These are based on legal and natural ingredients, and in my experience, they showed serious potential to boost performance and increase muscle mass without many common side effects of conventional steroids.

What Supplements Did Jackman Take To Build His Physique?

Hugh Jackman said that he takes creatine, BCAAs, and L-Carnitine to assist with his bulking, cutting, and putting on lean muscle.

Yes. In 2006, Jackman denied claims that he took steroids to get massive for his role as Wolverine in X-Men: The Last Stand. He said, “I would never take steroids. I think nothing is worse. I had to do an hour and a half in the gym every morning” [8].

So, Is Hugh Jackman Natty or Juiced?

Comparing his early photos with those of 2014, Hugh Jackman showed some signs that could indicate the use of steroids.

His vascularity and flushed skin make him a possible candidate for clenbuterol. And his increased muscle mass at an older age could indicate some PEDs usage as well.

But in my opinion, obtaining his Wolverine look via natural means is also possible. Optimize your diet, and regarding exercise, start light and then lift heavy.

One way to increase your performance and fast-track your progress towards looking like Wolverine would be through taking safe and legal steroid alternatives. In my practice, it has proven to be quite effective both in terms of performance and muscle building. Just make sure you do your cardio to burn that fat.

By Tyler Sellers 17 hours ago
The Calisthenics Diet
What To Eat & What Supplements To Take?